It was inevitable: someone was going to write an entire short story via Twitter. Probably it’s already happened, but I’ve managed to ignore it because, hard as I try to be all with-it and trendy,*I…I just can’t help myself. I find Twitter ANNOYING.

(*and by “try hard” I mean, kinda-sorta-give-a-nod-to-Twitter-now-and-then trying hard.)

But when my friend Lorna sent me a link to a story on the Huffington Post about David Mitchell’s tweeted short story, “The Right Sort,” I paid attention.

David Mitchell is my “it” author of the past year. Cloud Atlas led to the best discussion my book group’s had in 11 years. And The Thousand Autumns of Jakob de Zoet? Are you kidding? Best book I read all last year. (I’ve blogged about both; click on the titles if you want to read about them.)

According to the Huffington Post, Mitchell began his Twitter story in July as a promo for his forthcoming novel, The Bone Clocks. It took him six days and approximately 270 tweets.

And this from a guy who, apparently, usually uses Twitter about as much as I do! That must have been quite a stretch. My respect grows. (Wonder if it was Mitchell’s idea, or his publicist’s? Wouldn’t that have been an interesting conversation to listen to? “Hang on–you want me to write what?”) 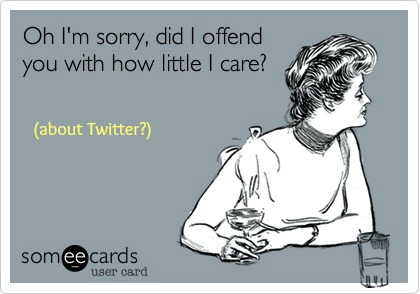 Since “The Right Sort” is narrated by a teenage boy tripping on his mum’s Valium, the trippy little bursts that we call tweets are actually a perfect medium. I just hope other authors don’t think they need to try the method themselves.

Are you listening, other authors? David Mitchell: yes. You: no. He can tweet whatever he wants. He can even tweet his whole novel if he has the digital fortitude. But you? Don’t even think about it.

Except maybe you, Kate Atkinson.

2 thoughts on “Okay, David Mitchell, Only You Can Get Away With This: The Tweet-Story-Novel-Promo”