Humbling experiences aren’t always fun. Or tasty. The other day, I had one that was both. I got together with a bunch of people to press apples into cider.

It started out totally fun, as I’d expected. A huge pile of boxed and bagged apples of all colors and sizes awaited us on the sunny grass. We set up a rough assembly line along two picnic tables: wash, bleach, rinse, cut. Ferry bowls of cut fruit to the pressers; ferry bowls of bruised bits to the compost. Chat, munch, switch roles. Joke, chat, munch. Ah, work parties! On a sunny day in October! What could feel more comfortable, neighborly, plain old right?

Except that it was taking FOREVER. At one point somebody glanced up and noticed that the giant apple-box pile did not seem to have shrunk at all. Then I made the mistake of asking what time it was. I had budgeted two hours in my busy day for this communal activity. We had been there for an hour and a half, and we were maybe a quarter done.

I have SO MUCH to do. Gotta finish my Book Two proofs to get them to my book designer in time to upload the fixes and still be able to have Headwinds ready at its launch party. Gotta paint the signs and put up posters for the Gretchen Wing & Friends concert next week. Augh, my concert!!! Gotta practice that run in the third song which keeps tripping me up, and that horrible C-B-flat-G progression I haven’t nailed yet. And I’m having friends over for dinner and I promised them pie. And, oh shoot, when’s the last time I vacuumed?

Did I mention that the group doing the cider-pressing was the Quaker Meeting I attend?Can there be a more communal, thoughtful, self-less group than a bunch of Quakers? Anyone else feeling the irony here? 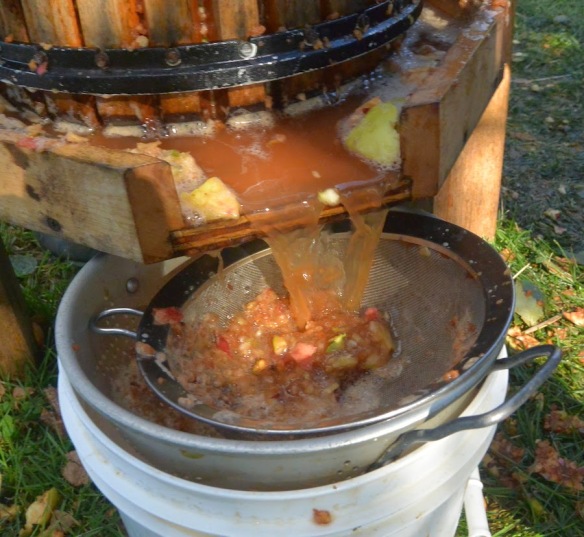 Apparently publishing a book and performing in a concert–especially within the same week–can make you kinda self-centered. Especially if you tend that way already.

So I stayed. We rinsed and chopped and chatted and munched. We laughed a lot. Finally, we stopped…not because we ran out of apples. We simply ran out of containers.

I biked home, two hours later than I had expected to, with two gallons of cider, and another gallon of perspective. Did not get my proofs fixed until the next day. Did not practice. Still have to paint those signs. Haven’t touched that vacuum. But yeah…that pie was delicious. And the cider–even more so.

Does this sound at all familiar to anyone? Do you ever struggle to let communal work find its place amid your personal “stuff,” or do you have the opposite problem? Any tips for finding that balance?