If you look at my books you’ll see my publisher is Madrona Branch Press.

That’s me. All us Indie authors are our own presses. But Madrona Branch, the name? There’s a story there, which I’ve told before.

Don’t have time for the previous blog post? Just look closely at that loopy branch.

The other day I was out for a walk and stopped to hug “my” tree as I usually do. 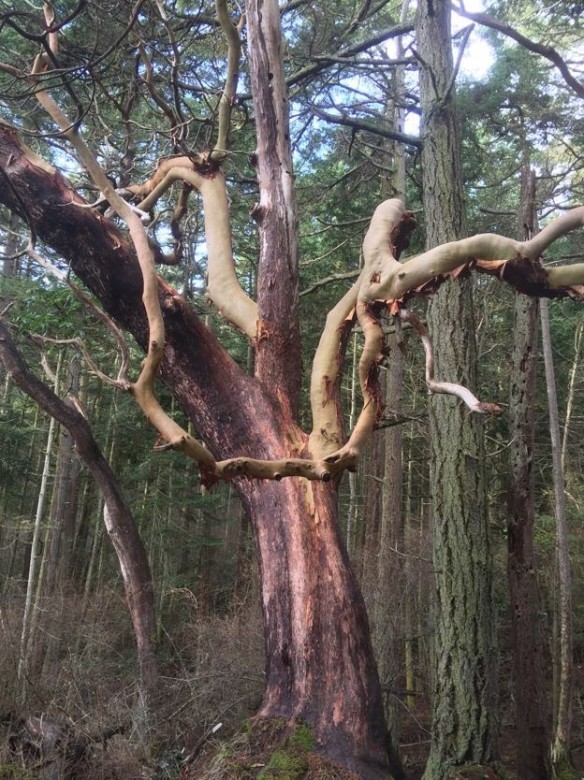 Then I stepped back and looked into its upper branches. My eyes found that astounding curl of branch which has become my personal emblem. Then, for the first time, they noticed something new that had always been there:

“Lean on me…when you’re not strong…”

Not only is that never-say-die branch supporting itself with its own loop, it’s also leaning against an older part of the original tree trunk. A dead part. But not so dead that it can’t lend its bulk to keep “my” branch climbing toward the sunlight. 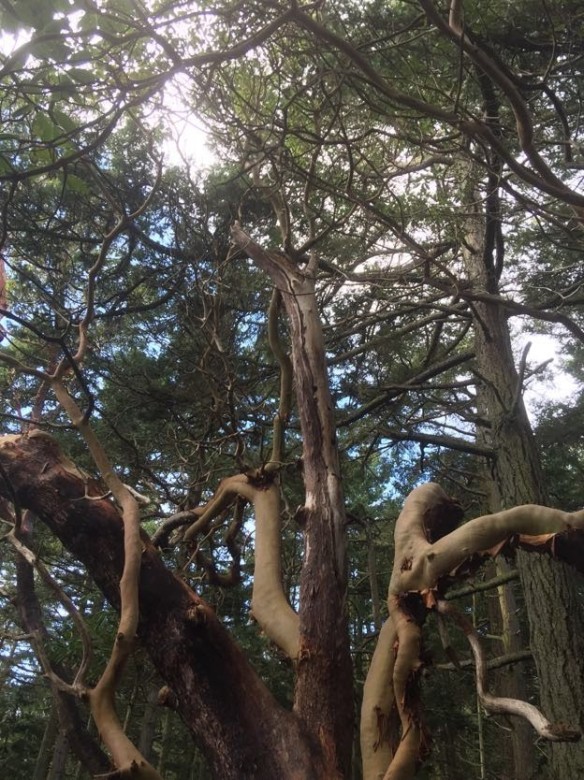 So I’ve extended my metaphor. Yes, I accepted the “failure” of not being traditionally published, and supported myself to keep growing upward, into independent publication. But I was never alone in that endeavor. I leaned heavily on my writing group, on my editor, on my book designer, and on countless friends I knew only via internet, who helped me with technology or marketing questions.

Not to say any of those folks are “dead wood.” They are all solidly growing themselves. The “dead” part of that solid trunk is all the authors over time whose work inspired me and taught me. Shakespeare. Zora Neale Hurston. William Carlos Williams. Wallace Stegner. Barbara Kingsolver. Michael Chabon. And on and on and on, a trunk of growth so powerful it will never stop nourishing growth, even when it’s finally broken down into soil.

There’s also something to be learned from a tree which uses its own dead parts as scaffolding, rather than shedding them. That’s US, guys–the community of writers! We are the whole damn tree.

A little further on my walk, I ran into another new favorite tree of mine. But that’s a whole other story, so I’ll save it for my next post.

Any other metaphors strike you from these pictures? Or do you have a Nature metaphor for your own experience? I would love to hear.

1 thought on “My Guru The Tree”