We just got back from vacation, and my husband and I are exhausted.

Not from the long flight back from Greece, although that took its toll. (I swear, jet lag should be declared an illegal drug: Just Say No.) We’re exhausted from trying to keep up with my parents.

It’s my own fault. This whole Cyclades Islands bike tour was my idea. “Let’s invite my parents,” I said. “We always have so much fun doing athletic things with them, and they won’t be able to do this kind of thing forever.” (Plus my mom is super laid-back and my dad is super-generous.) 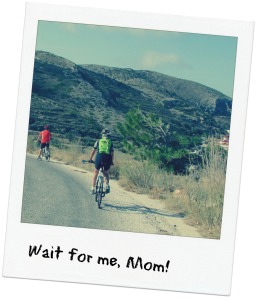 We are tired out from trying to keep up with Mom and Dad on all those hilly bike rides. Did I mention that my mom is 78 and my dad is 83?

They’ve always been terrific athletic role models, WAY ahead of their generation. My dad, a zoologist, got into distance running in the mid-1960s as the result of a near-death experience being chased down a beach by a bull elephant seal (at least the way he tells it, and hey, it’s his story, right?). My mom and my sisters got into running soon after. I wasn’t a huge fan, but I got into it in due time. (For more on this,  https://gretchenkwing.wordpress.com/2013/09/19/ill-put-a-gird…ok-maybe-years/

Mom became a running star almost immediately. Not that many women over 40 were running in the early 1970s, let alone racing, and mom was FAST. When she turned 45, she owned the national 10k record. Her picture graced the cover of WomenSports magazine in 1975–a journal that, sadly, did not survive into the 80s. Dad was never quite as competitive, relative to other men, since there were more of them. But he embraced each new age group eagerly, ready to face down his rivals. 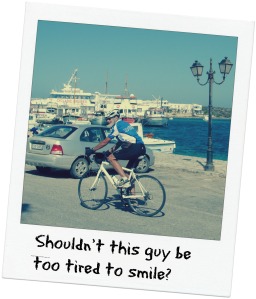 Together, they dominated the roads of North Carolina, then branched out around the country, running marathons, 10ks, 5ks, plus one and two-milers on the track. They even attended the World Masters track championships. And they cleaned up annually at the Levi’s Ride and Tie, a crazy cross-country endurance race involving teams of 2 people plus a horse. (My sisters and I got free Levi’s all through high school thanks to their prizes. 🙂 )

These days they’ve slowed down–just a little. Mom’s had a tough time with soft-tissue injuries and spends more time biking, riding, and doing weights and pilates than running. Dad still runs a couple times a week, and usually bikes the six miles to his lab, but he’s considering buying an electric tricycle to help him get home when fatigue finally catches up to him.

Not only did fatigue not catch up to him on our bike trip, the rest of the tour members hardly could. My husband and I kept waiting for Mom or Dad to ride in the sag wagon that followed our bike tour. Never happened. They rode every hilly, windy kilometer. 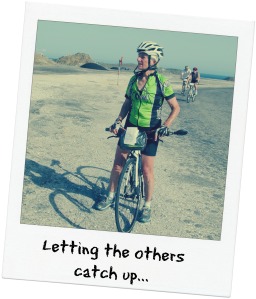 So I guess I just want to say Thanks. Thanks for being such great role models, not just for me and my sisters, but for everyone who sees you riding past, grey beard and grey braid flying in the wind. Thanks for showing the rest of us that a healthy old age may depend in part on good luck and good genes, but it DEFINITELY depends on hard work–work that doesn’t stop when the joints get creaky.

And yeah–thanks for the genes too.

How about you? Did you inherit any kind of fitness regimen from your parents, or were they your examples of how NOT to live? How do you find a way, in your super-busy lives, to model fitness for your children? Let us hear!

9 thoughts on “Fitness In Your Eighties: Keeping Up With My Parents”