I got some great responses in my last post’s Teen Slang Contest, What’s current slang for “good”? Some folks just dived in with their best guess–some as hopelessly out of date as my attempts. Others asked their kids. But the winner did the smartest thing: she asked a WHOLE BUNCH OF KIDS.

Easy for her, because this week’s contest winner, Marie Muai Laban, happens to be a teacher at Ford Middle School in Tacoma ! So she just asked for responses from three different classes, 6th, 7th, and 8th grade. Here’s what she got:

Did I mention that Marie used to be my own student, once upon a time at Franklin Pierce High School? I’m so proud. 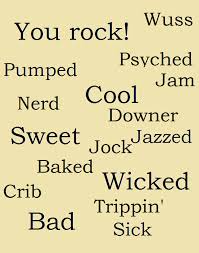 Still, I can’t help but notice a few things in this list.

“Awesome” has been around since the 80s, so it’s nice to see there are still a few kids in middle school who listen to their parents.

And speaking of comebacks, “boss”? All the way back from the 1950s? That’s–well, that’s just boss.

“Sick” was seconded by Nate Drew, the 13 year-old son of my friend Gianna Drew, and by my 21 year-old son, so they are Runners-Up.

Honorable Mention goes to Christi Angermeir, who came up with “epic”. Duh! Epic is awesome. Clutch. Dare I say boss?

So, a swag prize will be heading down to Tacoma this week. Since the quarter has just ended and Marie won’t be seeing those exact classes again, I’m just going to send a big batch of chocolate chip cookies, which she can distribute as she sees fit…or keep ’em all herself. Either way would be just dope with me.

Thanks for playing! See you at the next contest!

2 thoughts on “Teen Slang Contest Results: And The Sick, Epic Winner Is…”