If it sounds like bragging, I’m sorry; this is not my intention. But I’ve just checked something off my life list of hoped-for experiences: kayaking with orcas.

If you’re expecting a polemic about whale-watching or the Marine Mammals Act, this is not that post either. I have strong feelings about whale harassment, but as someone who has, in the past, paid to follow whales in a motorized boat, I’m no one to cast stones.

What else is this post not? A travel brochure for the San Juan Islands. A reverie on the joys of career-switching. A love poem.

Actually, that last one? It kind of is.

Here’s what happened. The Mate and I just spent the night camping on San Juan Island, the “Big Island” of the San Juans (compared to our little Lopez, which is more potluck than sushi restaurant in culture). Being Wings, we got up early to go paddling.

Our boys will tell you that the family mantra is, “If we get up early, we might see a moose!” (They will also tell you that said moose, if seen at all, was just as likely to be seen, after our return from our early-morning hike, in the parking lot hanging out with those tourists who had slept in.)

But my point is, we were out on the water before 7:30. So we had the Salish Sea all to ourselves. Heading toward Lime Kiln Point on San Juan’s western shore, we knew we were in the home waters of the resident pods, but we tried not to get our hopes up. After all, it was a gorgeous morning. The sun made the flat water sparkle. Giant madronas leaned over the dark rocks high above us. As if cued by a Nat Geo director, an eagle dived for a fish. All this arrayed before a backdrop of white-draped Olympic mountains, in the company of each other. As the Passover service says, “Dayenu”–it would have been sufficient.

And then the orcas came. Or rather, we came to them, or we came together, just as I’ve always dreamed about. 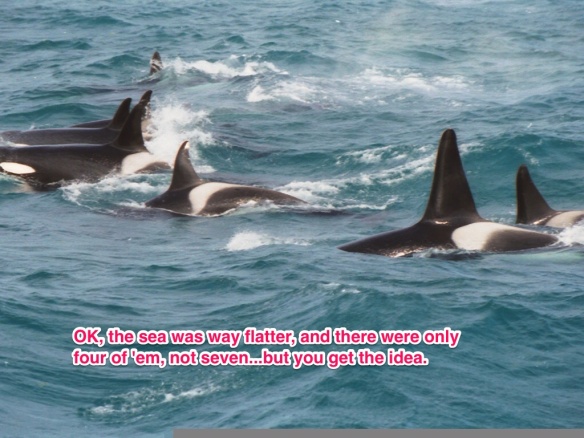 OK, not exactly. In those dreams, the orcas surface next to my kayak and look me in the eye. But, seriously? Those critters are HUGE!!! I was just as happy to view them from a safe distance of 75 yards. Plus I could feel smug about following the rules and trying to stay out of their way, or, ahem, at least not paddling toward them.

We paddled in slow circles for a while, resisting the attempts of the current to sweep us past the pod, whose vigorous leaps and splashes spoke of breakfast, or happiness, or both.  Three? Five? Four! Oh my, the SIZE of that dorsal fin!! And when the pod–oh look, a BABY!!–headed north, we turned around and kept pace with them for the next twenty minutes, marveling over every shining curve of black and white, every blast of breath.

(Of course as soon as we got home, we called up our kids and reminded them that, if you get up early, you can see a moose. Or the marine equivalent.)

So what is this post about? Blessings. Gifts. From Nature, God, the gods–pick your word. It’s about feeling overwhelmed by beauty and power and plain old good fortune. It’s about being completely humbled by what happens when one of your dreams comes true.

6 thoughts on “Paddling With Orcas: Why This Post Isn’t What You Think”