I am not a soccer fan. But I’m NOT a not-a-soccer-fan in the way that I’m a not-an-American-football-fan. I actually LIKE soccer.

So while my posts about the Seattle Seahawks and their amazing successes as Super Bowl Champs and crowd-noise world record holders reflect my bemusement at myself for even caring, this post is less of a stretch for me. I’ve always wanted to see a really high-level soccer game, and now I have. True, I would rather be blogging about the women’s World Cup matches going on just north of us this summer. But those are a little harder to get to. The Mate and I have talked about going to a game in Seattle for years, and this past weekend, we finally made it.

But if you’re looking for good sports writing, I’ll have to refer you to SI. This post is more in the realm of cultural anthropology. Here are my field notes:

Evidently Seattle has wealthy donors, and taxpayers, willing to spend quite a bit for a large sports venue–and I do mean LARGE. 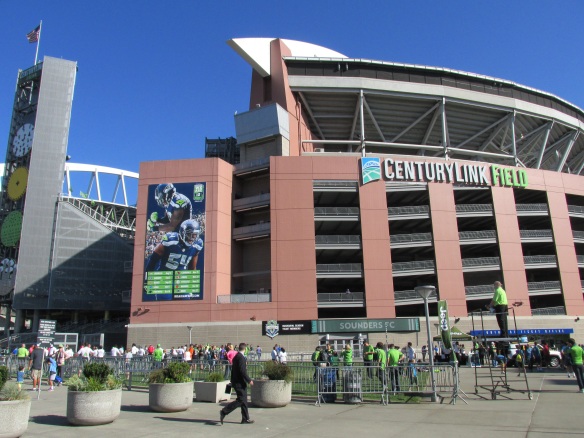 Looking north from Century Link Field (now there’s a name that rolls gracefully off the tongue), one sees the Seattle economy is apparently alive and well. 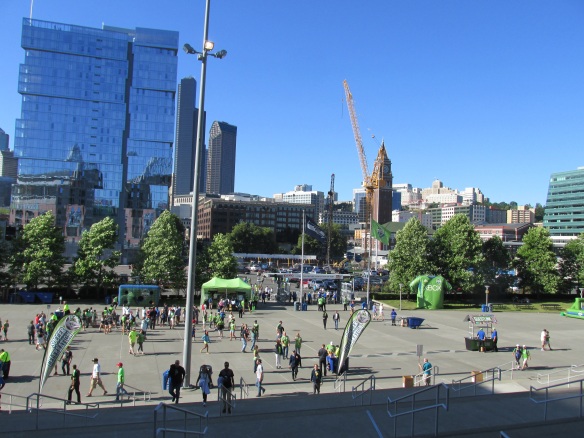 When did the Emerald City get so SHINY?

If one didn’t know the team was called the Sounders, one would think we were cheering for the Seattle XBOX. (Is there anther sport which places product names above team names? Maybe NASCAR?) 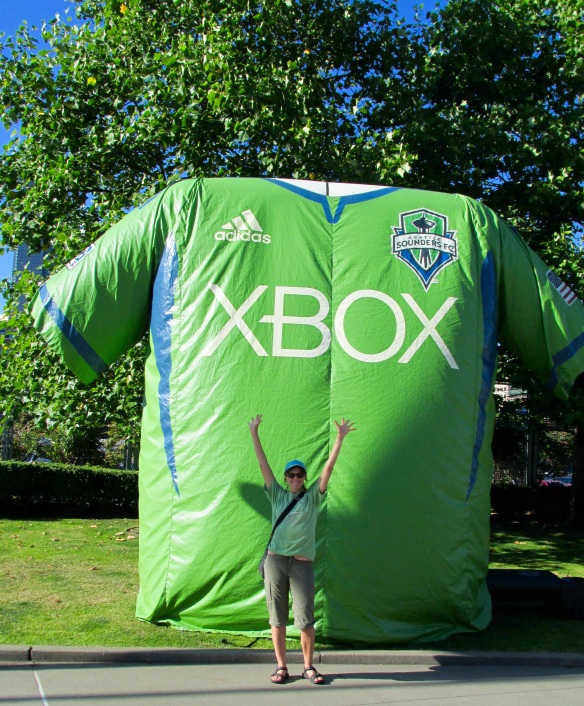 So my green T-shirt says “Lopez Fun Run,” not “XBox.” At least mine was free!

The Sounders brag about having the highest attendance in Major League Soccer, and that night they posted 41,000. But nearly the entire upper level of Century Link field’s seats was blocked off until football season, which tells you something about the relative popularity of the two sports. And the power of the 12th Man. 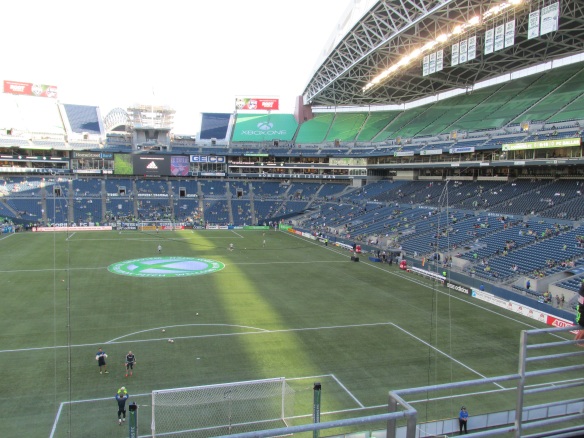 Fully a third of the seats…waiting for the OTHER “football.”

The fan base appeared young…some REALLY young. But very prepared. 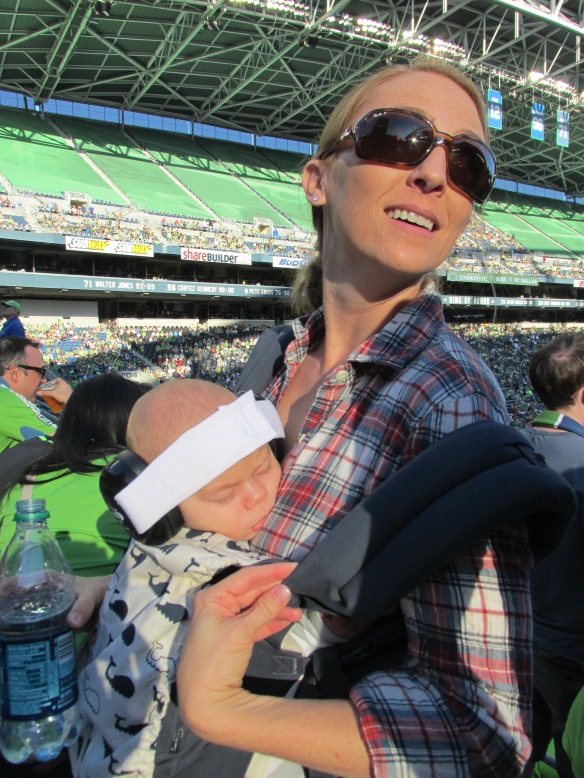 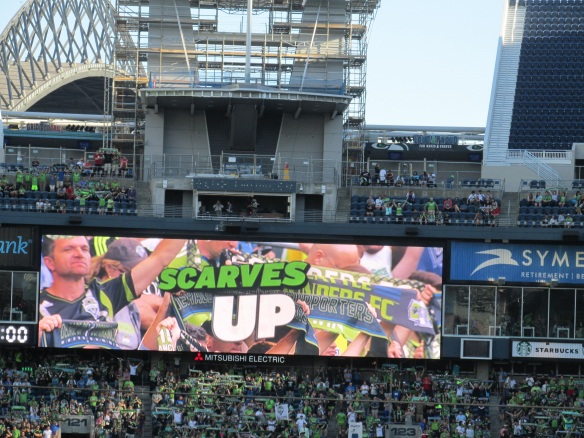 The only time I ever saw the crowd prompted to cheer…

No one seemed to miss the cheerleaders; most of the crowd stood (and/or danced) the entire game. And the cheers were very British: “Come on, Seattle. Fight and win!” (Seriously.) 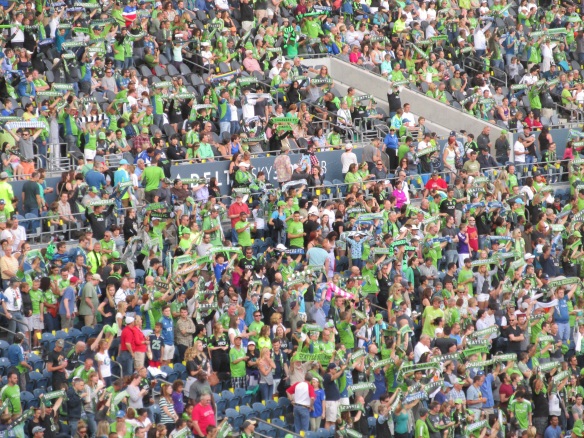 …and it worked! Scarves up!

Cliff Dempsey being the only Sounder I knew by name (since he plays for the U.S. in World Cup action), I focused my camera on him. It turns out I am a terrible sports photographer. 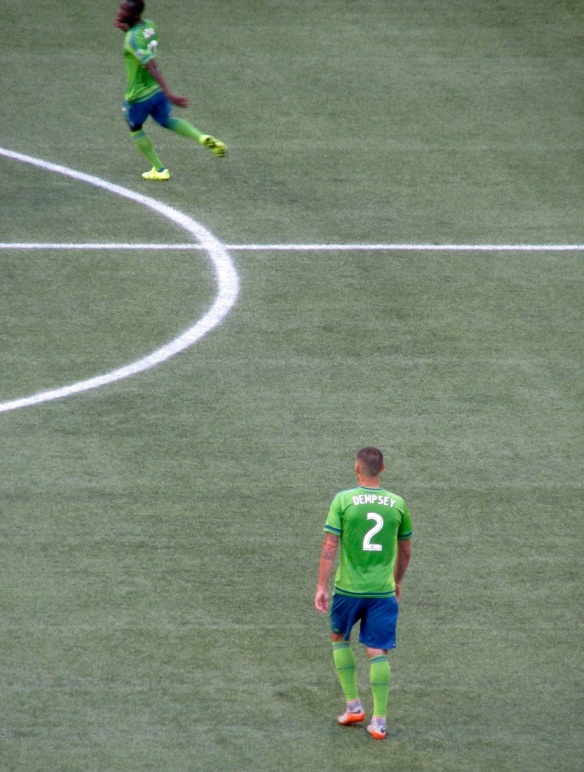 Ironically, none of Seattle’s three goals were scored by this man. 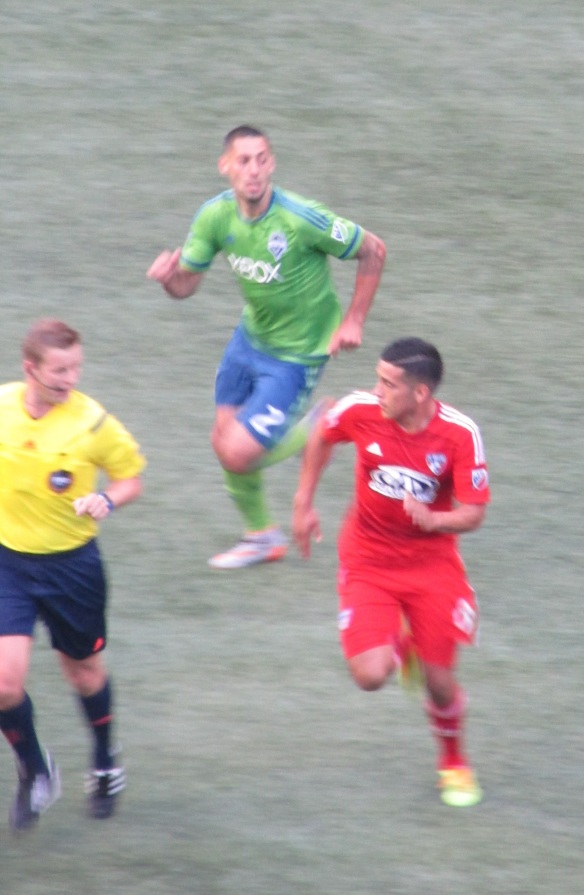 To conclude this report, here are my (completely objective) findings:

Reasons why soccer is incredibly appealing to people like me and will therefore never replace American football:

–terrifically fast action with no breaks (Need to use the bathroom or get some more snacks? You’re on your own.)

–no cheerleaders (Standing up and dancing for 90 minutes? Wonderfully energizing. And don’t get me started on cheerleaders.)

–no protective gear, so you can really see those athletic bodies at work (although, seeing some of those header collisions…wow. If that were my kid…)

–the women’s game is just as high-powered and skilled as the men’s.

Reasons why soccer is unappealing to people like me and is therefore growing by leaps and bounds within American culture:

–this sport of running and kicking a ball is much more violent than it looks. (And corrupt. But you already knew that.)

Overall? We had a great evening. Parking and beer cost twice as much as the hot dogs we bought on the street, but hey–someone’s got to pay for that stadium, right? And it was still cheaper than one of those jerseys. So, go XBOX! I mean Sounders!