Nothing like a major life purchase to force you to look your character straight in the eye. When I bought my first guitar this week, I learned about a few traits. Or re-learned. (Sigh.)

First of all, yes, I’ve owned a guitar since 1981. But that one was given to me in a typically generous but not well-thought-out impulse by my father, who didn’t consult me on what kind of guitar his college-student daughter might like. This week’s purchase was my first EVER. Here’s what I (re)learned about myself:

Trait #1: Good Enough is Good Enough. No matter that the string action of my 1981 guitar is so high I had to have the bridge lowered, and it STILL kills my fingers to play an F chord. No matter that the dreadnought body is so large and wide I get shoulder aches when I play too long. When I have something that works okay, I hang onto it forever, even when I know I don’t have to. Loyalty? Cheapness? Efficiency? Laziness? Eco-friendliness? All of the above?

Trait #2: Big Decisions Make Me Feel Small. Even with one music buddy at my side to ask all the right questions and help me listen for the right sounds; even with detailed notes on guitars researched by another music buddy; even with that second music buddy adding his two cents via speakerphone, I still felt like a little girl in that guitar shop. Overwhelmed. Unqualified. Unworthy. False modesty? Real modesty? Chickenshitedness? Fear of not living up to my own musical hopes and dreams? All of the above?

Trait #3: I Won’t Apologize For Being Cheap When Being Not-Cheap Feels Wrong. I went into that guitar shop with a $600 price limit in mind. I knew that was the low end, and I can give you all the arguments of friends who tried to talk me into looking at guitars over three times that much. “You’ve had that guitar 35 years; you’ll likely have the next one for at least a couple more decades.” “You’re playing so much more now–you’re worth it.” “Think of how much better a musician you’ll be with a better instrument to live up to.” “You can afford it–why sell yourself short?” My answer: I don’t want to feel like my instrument is way above me in quality. I’m 54, I have a wonderfully balanced life, and I’m never going to devote enough time to music to be the kind of guitarist who needs a $2,000 guitar. I’m buying a new guitar for a better physical fit, not an upgrade. Therefore my cheapness is not simply cheapness–it’s sense.

Yes, I did try out a $1,000 guitar. I might even have bought it if the fretboard had felt right. But it didn’t. And that $2,5000 one? I tried it too, and it sounded and felt beautiful…except to my gut. Which I listened to.

Let’s take a closer look, shall we? 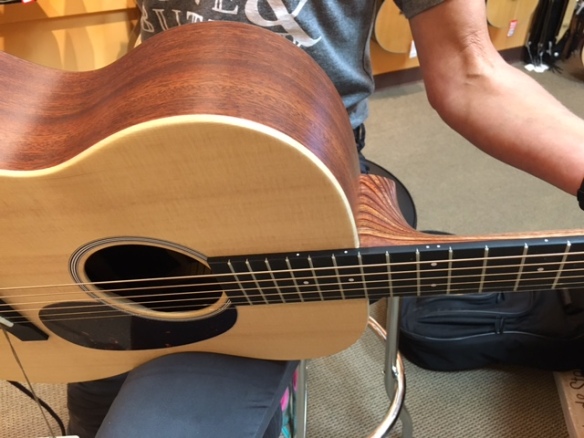 It’s laminate…but it’s still pretty. And Guitar Friend #2 assured me only the top of the guitar matters when it comes to sound.

YES. Come on home with me, darlin’. Let’s make beautiful music together.

I walked out of that shop with a beautiful $600 guitar, and one more (re)discovery:

Trait #4: I Value Family and Friends Above Everything, Even Music. I would never have considered going guitar shopping without their encouragement (my Mate’s especially), and I never would have returned home with “Di” without their help.

So I’m curious. Any major purchases in your life had that holding-up-the-mirror effect on you lately? Please share!

2 thoughts on “Notes to Self: Everything I Know About Myself I Learned From My New Guitar”