Last year I wrote about my “godkid,” Allison Snow. My theme was the word itself, the concept. Today I want to write about Allison herself—or Al, as I call her. I’m busting with pride.

I first met Al when she was a student in my 10th grade Honors English class. She was a competent, but not a terrific writer; a careful, but neither avid nor outstandingly insightful reader. In short, I enjoyed her as a student, but would never have identified her as one of my faves. One snippet did catch my attention, however: she wrote her “Turning Point in my Life” essay about the death of her father when she was twelve. I did the math and realized that she was only fourteen, a full year younger than most of her peers.

The following year, I and five of my braver colleagues started a pilot “school-within-a-school” half-day program called International Business and Global Studies. Project-based, with a fully-integrated curriculum and student-centered learning (are you glazing over yet?), IBGS attracted students who were bored with traditional classrooms. To my surprise, Al signed up and became an IBGS star. I still remember Al’s semester presentation on Greece, which included artifacts from Tacoma’s Greek Festival, which she had attended, on a weekend.

Even more surprising, Al became a cheerleader. That serious young woman, shrieking “Card-inal Pow-er!”— really? Should’ve tipped me off: in her quiet way, Al made her own decisions about what course to pursue, regardless of expectation. Motivated. Purposeful.

Her own family learned this during Al’s senior year. I was on leave in New Zealand (let’s hear it for spouses with paid sabbatical!), and Al announced to her mom that she would like her graduation present early: a plane ticket. Then she got on the school’s office email (not having her own—remember those days?) and asked me for permission to come visit.

“A cheerleader?” my husband asked. “For ten days?” (Not that he was being judgmental or anything.) Little did he know that visit would turn into three weeks. 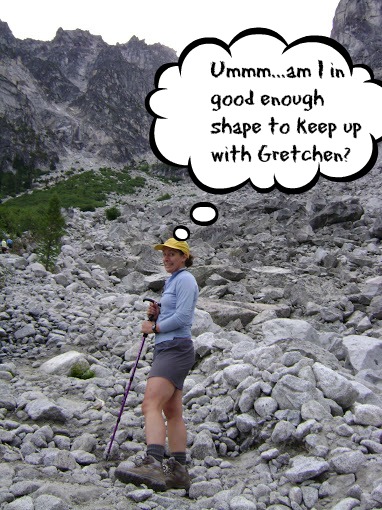 Once Al arrived, she realized how ridiculously short her trip was for coming such a distance. In a super-long-distance call, she talked her mom into letting her change her return ticket. She used that time to explore most of the South Island with us, babysitting our young boys. By the time she left, she was family…

…except in one regard. Although fit, Al was never what I’d call an athlete. Yes, I KNOW cheerleaders have to be in good shape, but the mentality is different: they don’t train like competitive athletes do. Although The Mate and I had mostly retired from racing, we still considered our daily workout the same way we considered meals: essential. I don’t remember Al ever offering to go for a jog with me. Motivation and purpose didn’t seem to go there.

Fast-forward ten years: Al, now a young teacher (like me—I know, right?!) decides to try triathlon. The results: one and three-quarter hours. 167th in her age group. Proud of herself.

And in 2014?  Personal Best by thirty minutes in a half-Ironman. Thirty minutes! And last week: First place female.

When I became a semi-elite runner, I had an athletic family pushing me, college coaches, a track club. Al has a coach now, and a team, but only because she went out there and got them, all on her own.

On July 4, I’m going to run our little island’s 5k Fun Run, the only “racing” I do these days. Al’s going to run it with me…and she’s going to kick my butt. And I can’t wait.

So here’s the 2016 update. She did kick my butt two years ago, but not as badly as she’d kick it now were I to try to race with her again. I’ve slowed down, and she’s sped up–a lot. This weekend, she’s going to test her tough, toned body in three sports, her eyes on that Hawaiian prize. I can’t be there to cheer–but I’m doing it right now, as you’re reading this.

Not sure who took this photo, but thanks for it!

1 thought on “Go Al: My Ironwoman Goddaughter Goes For Kona”