“Establish the culture and practice of voting as part of a desired civic lifestyle through integration of non- partisan election work, issue work, and culture work in a continuous cycle.
Empower and train leaders and volunteers from our communities to be strategic leaders, messengers, and spokespeople for issues critical to equality, justice, and opportunity.”

Sound like good goals to you? I can’t think of anyone in any political party who would not subscribe to them.

So what if I tell you these goals are espoused by someone called Charlemagne Tha God? 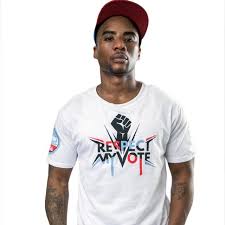 I just saw him interviewed on The Daily Show and came away feeling inspired by his inspiration to get folks to vote. I was so intrigued, I looked him up.

His real name (according to good ol’ Wikipedia) is Lenard McKelvey, and he runs a Hip-Hop radio show called The Breakfast Club. It’s the home base of Hip Hop Caucus, whose website can be found under respectmyvote.com

Those goals above? They come from Hip Hop Caucus. More specifically, this is what those folks do:

★Community Organizing: We organize 14 – 40 year-olds, who identify with Hip Hop Culture, and share values of justice, equality, and opportunity.

★Grassroots Leadership Development: We provide leadership training and real-world civic leadership opportunities for cultural influencers at the grassroots level.
★Communicate to Large Audiences: Through partnerships with artists, celebrities, and media we drive narratives about important issues through cultural channels reaching millions of people.

★Cultivate and Promote Thought Leadership: We source solutions for local to global challenges from our communities and advocate for them to decision makers and influencers.

You know what? Except for the word “influencers” (sorry, old English teacher here), there’s nothing about the above that I don’t celebrate for my country.

Why am I sharing this now? Because you know, as I do, that Hip-Hop culture is marginalized in our country. Many–perhaps most?–older white folks (like me) assume Hip-Hop is probably apolitical at best, anarchic at worst. But these guys? They’re downright Kiwanis.

My mind feels broadened, learning about Hip-Hop Caucus. And with all the stupidity of this election year, my heart feels warmed. Go, America.

2 thoughts on “Not THAT Breakfast Club: Why Hip-Hop May Be More Straight-Laced Than You Thought”