If you appreciate rodents of usual size, cute cabins, and veggies of Hispanic cuisine, this post is for you.

Fourteen years ago our little family of four spent five months in Santa Fe as part of the Mate’s last sabbatical. We love our wet, green northwest home, but we never got that red desert out of our system. We LOVE coming back to New Mexico.

Albuquerque is actually a better fit for us than artsy Santa Fe, with its twisty old streets too narrow for biking and its running trails all headed straight up mountains. And since we have a dear friend in Albuquerque it’s become a regular stop for us.

Of course we have to get our fix of the best green chiles in the country. These are from The Range in Bernalillo: 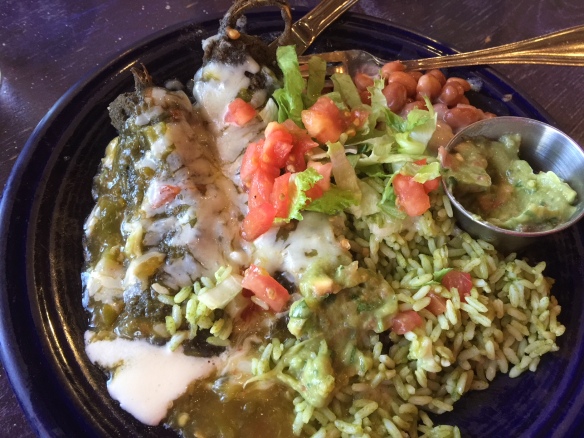 Then a hike along the flank of the gorgeous Sandia mountains.

Thanks to Desert Buddy Beth for taking this!

Usually we head into the heart of Texas after leaving the Land of Enchantment, but this year we let a ferocious tailwind zoom us across the Panhandle and right into northwestern Oklahoma.

On past trips OK has been a mess of blizzard or tornado, but this year it’s been downright lamblike. We spent a night each at two different state parks, Boiling Springs in the west and Greenleaf in the east, with a bike ride in Tulsa along the Arkansas River in between. We now have a much cosier relationship with the Sooner state.

Boiling Springs is an oasis on the prairie, featuring enormous cottonwoods. The joys of off-season: we had the whole place to ourselves, and the cabin cost less than a nice motel room.

But the highlight was this porcupine, asleep in the high, sunlit branches with only a tubby half-moon for company.

Wait a minute…that’s not a bird’s nest!

By the end of the following day, no more coyotes howling at night, and cottonwoods had switched to oaks as we entered Ozark country in eastern OK: Greenleaf State Park. The hiking was only ok (appropriately), but oh, those CCC cabins!

Doesn’t it look like it’s melting? I guess those CCC boys found a way to build quickly on a slope.

Because the weather gods were being so sweet, we decided to take advantage and visit another state that’s usually “under the weather” in February: Missouri. (Also, we just couldn’t resist staying off I-40 one more day! No offense, I-40…we’re just a tad sick of you.)

Hey, what are you doing awake in the middle of the day?

but also a spring which makes Oklahoma’s “Boiling Spring” seem like a joke. Notice I didn’t take a picture of Boiling Spring? Now check out Missouri’s Big Spring:

288 MILLION gallons per day bursts out from the base of this cliff!

The Show Me State is right! Here are a couple more views:

The limestone cliff wall, leading to the spring

Closeup of that incredible upwelling of water:

I have Spring Fever!

Oh, and lest you’re wondering about those Traveling Avocados of ours…#4 topped a delicious plate of pasta containing capers and sun-dried tomatoes and Parmesan and greens, but we snarfed it before I remembered to take a picture. And #s 5 and 6 are apparently holding off ripening till we arrive in North Carolina. I feel ya, avocados!