Ever have one of those weeks where every conversation feels so weighty, you wonder that you can’t count it as a workout? I’m having one of those: Impeachment, White Privilege, Climate Crisis, MeToo…oof. Never thought I’d turn to my blog for the purposes of lightening up–but that’s exactly what I’m doing now.

No, I don’t mean smoking. Don’t you know me by now, people? I mean my FEET.

Yes, these are mine. (No, they don’t exactly fit my healthy-living, down-to-earth, thrift-shopping style, but then again, did I mention I own camo pants? They’re PANTS. And these are SHOES. Get over it.)

Here’s how I came to own these glitzy beauties. Fourth of July evening, the Mate and I were gathered with some friends in a field, ready to watch our island’s epic fireworks show. But while waiting, we were treated to a pretty phenomenal pre-show involving kids running around like gangbusters, waving glow-sticks and high-tossing some very cool gizmos that flashed and glowed while they twirled back to earth.

And then I saw him: the child with the Feet of Fire.

A blur of incandescent rainbow, that’s what his feet were as he ran. A breathtaking river of fairy-light. I couldn’t take my eyes off them…even though I wasn’t at all sure what I was seeing. “What,” I gasped, “am I seeing?”

Luckily my 20something friend did what 20something friends do: she googled “shoe lights.” A moment later I was looking at an ad for LED shoes–the kind where the LEDs go all the way around the sole, not just at the back of the shoe.

“They have ’em in grownup sizes,” she observed.

And now a shout-out to The Mate–usually a total stick-in-the-mud when it comes to fads. “You know,” he told me, “those would be great for your night rides.”

“Thirty-four fifty,” my friend read from her phone.

The fireworks were AMAZING that night, maybe the best show ever. But lights were going off in my mind too.

Long story short: next day I ordered the magic footwear. They came in all colors, including sensible black, but you know what–if I’m getting flashy shoes, I want FLASHY shoes.

Now you see me…

So now when I hop on my bike at 3 a.m. for the long, dark ride to the bakery, I do so feeling like a queen, with Feet of Fire. No one gets to see ’em but the deer, and the oh-so-occasional passing car…but I like to think I’ve blown their minds when they do.

Oh, the ride home in daylight? Nowhere near so impressive. And I keep having to explain to people that they’re just SHOES that I bought for SAFETY. Because of course that’s the absolute, number-one reason. 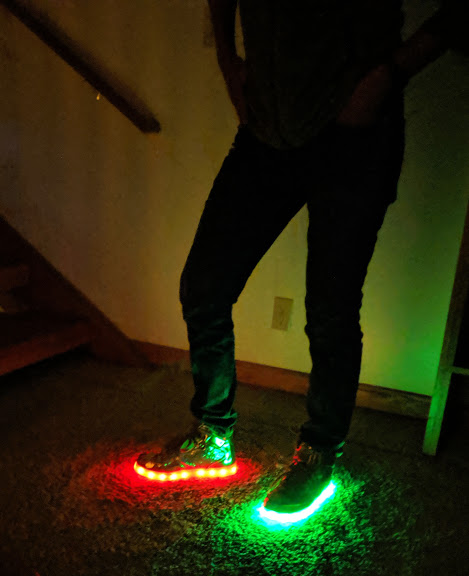 …now you REALLY see me.

Anyone else ever made a ridiculous purchase that made you ridiculously happy? Do tell.