This is THE weekend. As I’m writing this, the countdown clock for the start of the Coast to Coast is down to 2 hours something. It starts on Friday, Feb. 7. Today is Thursday, Feb. 6. So it starts in two hours–how??? Oh yeah–New Zealand time. Already tomorrow there. No wonder those buggers are so quick. 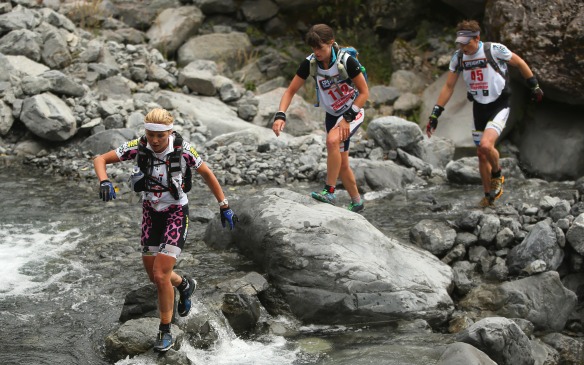 Actually, the race that starts Friday is the “easy” race: competitors take TWO days to race across the skinny part of NZ’s South Island, from Coast to Coast, on foot, bicycle, and kayak. And by “easy” I mean “less insane.” Here’s the C2C’s own description of the race course:

Competitors leave on foot from the black sands and lush windswept landscapes on the West Coast, running 2.2km inland to their waiting bikes. They then follow the Taramakau River 50km to the foothills of the Southern Alps where they switch their bikes for runners and the first true test of the course.

The 30.5km run is mainly off trail with the rocky riverbed often the only direct line up the valley. Competitors encounter multiple river crossings with frigid crystal clear water and an elevation gain of nearly 800m on their way to Goat Pass and the start of the descent.

With the very fastest athletes taking nearly 3 hours the run is as much a test of co-ordination and strength as it is outright speed.
A short 15km ride follows before the second jewel in the course. The mighty Waimakariri River. 70kms of braids and a stunning gorge, the river section is for many both the highlight and the crux of the race. The water flows swiftly in places and mixes long calm sections with rapids up to grade 2 in size.

The racer I followed in 2017, Josie, finishing the 70k kayak portion (my photo)

It takes competitors from the heart of the Southern Alps out on to the Canterbury Plains where just one final 70km ride stands between competitors and the finish on the East Coast at the New Brighton Pier amongst a vibrant beachside festival.

Got that? Run to ride to run to ride to paddle to ride. For a total of 238 kilometers. That’s over 147 miles. The actual World Multisport Championship part of the C2C doesn’t start till Saturday–at 0:dark-thirty. That’s the race they call The Longest Day. And you can guess why.

I first learned about this race when my family and I spent a year in New Zealand, back in the 1990s. I came to see multisport racing in general, and the Coast to Coast in particular, as emblematic of the Kiwi approach both to sport and to life. (Notice how much those two are entwined? Yeah, all those cliche-spouting coaches are pretty much right.)

Which is why the novel I’m writing is set in NZ, and features a race much like the C2C. And why my heart is now with the athlete who let me “ride along” with her crew, back in 2017, so I could see and feel the race up close. You can read that story here.

What, you thought I was going to DO the Longest Day? Do I seem that athletic to you? (If yes, ummm…thanks? But no thanks!)

In 2017, Josie, the athlete I followed–a mum with two daughters–finished the Longest Day in just over 15 hours, fourth woman! This year, Josie’s going for it again! Over the course of her Saturday, our Friday, I’ll be checking in with the course-tracker app to follow her progress up and over the mountains, through dark of night, fording crystalline streams…

Now back to my nice, comfy laptop…