The day we left North Carolina, making Big Left Turn #2 to head for our island home on the opposite end of the continent, all things basketball died. We were shocked, but still spent that first night enjoying the scenic beauty of eastern Kentucky’s Carter Caves State Park…

Apparently they have caves there. But the natural bridges were enough for me! 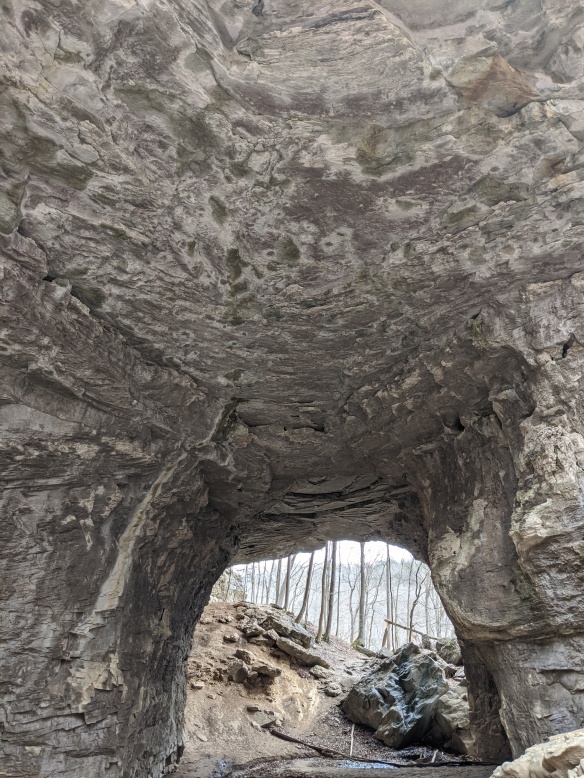 Even cooler from below.

A magnificent beech…one of the trees I do miss, out west.

Next day, we started driving, listening to CNN, and to the sound of most of our road-trip joy being sucked away. We determined not to visit the friend we’d hoped to visit in Louisville. Ditto Milwaukee, the Twin Cities, Denver, and Yakima. We’ve probably already visited too many dear ones.

Just get us home. This isn’t fun any more. Too much is out of our control.

Which explains why I have NO pictures from Missouri, even though I did enjoy a pleasant walk-jog through a park in Columbia. Kansas? This is my only pic, shot out the car window to let Son Two know that it was still winter where we were. 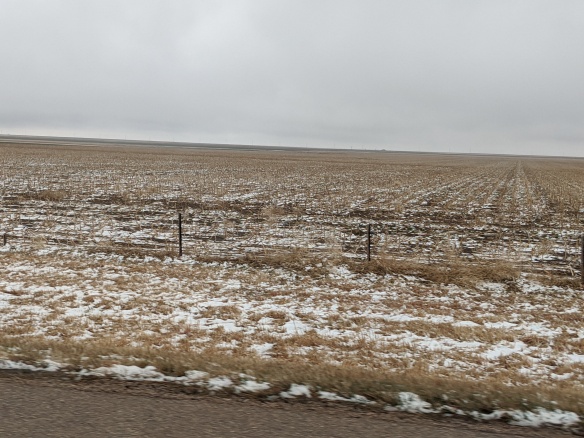 What you see is what you get.

I wish I could say something encouraging about western Kansas, but…it’s an awful lot like eastern Colorado, which, guess what? I also took no pictures of as we zoomed through. Home, home, home. We exercised in the motel’s fitness room and passed up all of Denver’s bike paths. (Sour grapes: it was awfully windy anyway, though much warmer than we’d feared.)

I did celebrate the last of the Traveling Hollywood Oranges, though: 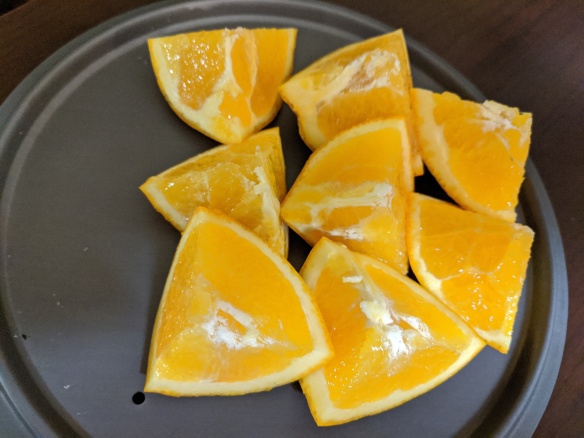 Like a month of travelin’ sunshine! Thanks, Cousin Susi!

In Wyoming, I snapped this shot just to let my mom know that Wyoming seemed to be about done with winter. But we didn’t stop.

And then the rocks got cool enough to want their pictures taken. From the car. 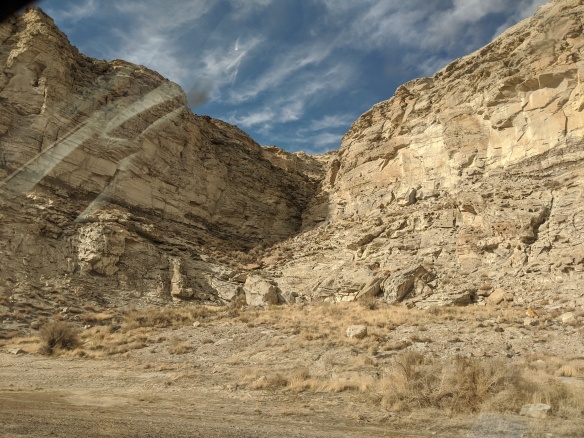 I’d hike in there. Just not now.

And now, here we are in Rock Springs, Wyoming, just 30 miles or so from Flaming Gorge National Recreation Area…and we’re not going. It’s out of our way, and we’re focused on mileage. Home, home, home.

Instead, I’ll leave you with a picture of one of my trademark Noodlebag Dinners*,

Even better than it looks.

*Noodlebag Dinner = pasta pre-cooked & put in bag w/ olive oil & salt, to which all kinds of yummy things can be added before microwaving in a motel room for a cheapo gourmet meal

How are all of y’all coping in this new reality? Any of you fellow travelers (literal ones) changing your traveling routines? Singing that alphabet song as you wash your hands after every truck-stop transaction? Avoiding dropping by friends? Stay healthy out there, everyone…

4 thoughts on “Road Trip X, Days 29-32, Kentucky to Missouri to Kansas to Colorado to Wyoming: Forget Scenery, Just Get Us Home, Please”