I set a world record last week! Well, a personal best anyway. But if the winners of a US-and-a-teensy-bit-of-Canada baseball championship can call themselves World Champions, I figure I’m entitled.

18 layers. That’s 18 cake layers. But in between each layer was a thick coating of apricot puree and an even thicker layer of chocolate butter cream, so really you could call it 54 layers if you wanted to. No objection here.

Back story: The Mate’s birthday falls right around Thanksgiving (this year, the Tuesday before). I’ve been making his birthday cake every year since before he was my Mate–approximately 36 years. (I know I missed one sabbatical year, but I think that’s all.) I first made it back when I was wooing him and knew he had an affinity for apricots, since he was raised in the part of California where they grow (or used to; it’s Silicon Valley now). 36 years later, I’d say that little trick worked.

But back to last week. I was in our cousins’ kitchen, using their implements, but I’d brought my own German cookbook along. The recipe for Prinzregententorte (Prince Regent Cake) is, as you might guess, a little tricky, and I haven’t managed to memorize it in 36 years. I usually go with 2 1/2 times the recipe in order to end up with an impressive 15 layers, baking mere spoonfuls of batter in shifts.

But listen, children: Pride Goeth Before a Fall. This year, in the middle of bragging to my cousins about how awesome this cake was and how long I’d been making it, I distracted myself so much that I forgot…to add…the flour.

Even worse: I didn’t even figure out WHY the layers were baking so funky–or not baking–until I’d used up 6 layers’ worth.

Oops. Duh. Sigh. Now what? Admit defeat and serve up a humble 9-layer cake, after all that bragging?

Inconceivable. I made more batter. Quite a bit more. The result (warning: these snapshots were NOT taken with a blog post in mind, so please don’t judge too harshly): 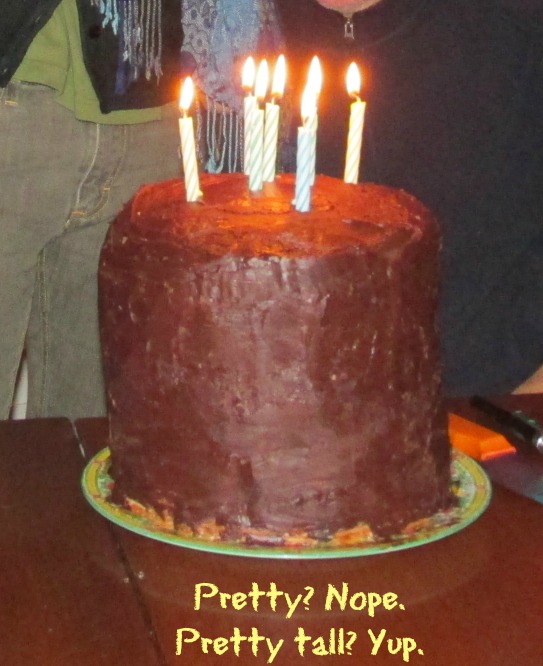 I know, right? Looks more like a tophat than a cake!  But just in case you’re not buying the 18 layers…

Two days later was Thanksgiving. I baked the pies, plus another (more reasonably-sized) birthday cake for one of the cousins. We didn’t need any of it; we had Cakezilla. But tradition is tradition.

Next year: 20? It could happen. I’m getting awfully absent-minded.