I’ve written before about my father’s work at the Duke Lemur Center. But never before has the mainstream media captured that work so clearly for us laypeople. And I have to say, I’m feeling a little conflicted.

On the one hand, my dad is a Serious Scientist who’s spent his life doing Serious Science. His past subjects have ranged from elephant seals to domestic and feral goats to reef fish to, yes, lemurs. (Which is why he is a co-founder of the Duke Lemur Center in my hometown, Durham, North Carolina.) His work has taken him all over the world, most notably to Madagascar, where lemurs live. This particular study has to do with understanding primate brains, with an eye to everything from surgery to long-range space travel. SERIOUS STUFF.

But on the other hand…these animals are really stinkin’ CUTE!

Now, thanks to this episode of Science Friday, created by Luke Groskin and Johanna Mayer, his research is easy to explain…and it’s also ridiculously adorable. I don’t really know what to do with that. But I guess if Dr. Serious Scientist Peter Klopfer can handle his subjects’ cuteness, so can I. Enjoy!

How about another lemur update? Here we go.

If you only stop by Wing’s World now and then you might not know my connection to the Duke Lemur Center in Durham, NC. I’m no biologist; I just grew up there. Literally. My sisters and I roamed the building back when no one knew about it nor worried about little kids roaming among the other primates.

See, I chose my parents wisely. Not only are they largely responsible for Carolina Friends School, my dad’s also the one who turned my hometown into the largest home for lemurs, anywhere in the world outside of Madagascar.

If you’re ever in central North Carolina, you can see for yourself–in a guided tour; sorry, no more roaming. But if you don’t get the chance, here’s a glimpse of how it all began, 50 years ago:

What else can I say? Congrats, lemurs. Congrats, Duke. Way to go, Dad.

Proud daughter + lemur-lover = another update on my dad’s research.

Really, this isn’t new. It’s just a look at how popular culture is becoming (understandably) attracted to the idea of lemurs one day helping humans with things like medical breakthroughs or space travel.

So here’s a cool article & video from my hometown, Durham, North Carolina (home of the Duke Lemur Center). I couldn’t get the video to copy separately, but if you click on this link, you can watch it:

(Not actually the lemur in question, but be honest: this is what you think of when you hear “lemur,” right? Courtesy Duke Lemur Center.)

Can’t get enough lemurs? Click on this link, Duke Lemur Center, to get your fill.

Coming soon: the latest on Book Two of the Flying Burgowski trilogy, Headwinds. But until then–enjoy the lemurs!

When the fat-tailed lemur becomes the most famous animal in the world, you can say you read about it here first. Unless you read it in Slate.

I got an email from my dad the other day, which turned out to be forwarded from some random person who had sent him a link to something else random. He does that a lot, so I almost deleted it. Then I saw the word “Slate” and “lemur.”

Slate? As in the online magazine? Hip and savvy and mainstream? I clicked. The title said:

Do Lemurs Hold the Secret to Suspended Animation?

What we might be able to learn from our closest hibernating cousins.

Sure enough, Slate had run an article on my dad’s research.

Why should you care? I’ll let David Casarett of Slate tell you:

You know all about suspended animation because it makes an appearance in virtually every science-fiction movie that’s ever been made. Usually it’s portrayed as a handy device for space travel. But what you probably don’t know is that suspended animation isn’t just science fiction. It’s real. And it could save lives.

Suspended animation is really just slowed metabolism, like hibernation. Think of it asartificial hibernation. When animals hibernate (and when science-fiction characters venture off-world), they’re in a state in which their cells have downshifted to low gear and they need very little oxygen.

That’s handy for intergalactic travel, of course. But what if we could use that trick in situations in which our cells—and particularly our brain cells—don’t have access to much oxygen? That might be the case for a patient who has suffered a cardiac arrest and who isn’t breathing. Or someone injured in a car accident, or someone with a serious gunshot wound. Or a soldier injured on the battlefield.

[Reprinted from Shocked: Adventures in Bringing Back the Recently Dead by David Casarett with permission of Current, a member of Penguin Group (USA) LLC, A Penguin Random House Company. Copyright (c) David Casarett, 2014.]

My dad studies lemurs that hibernate. So what? Don’t lots of animals do that? Not PRIMATES. There’s only one that does that: the fat-tailed lemur. What can it teach us about our own brain’s capacity for suspended animation?

In 2005…a German team of researchers collected the first evidence of prolonged hibernation in fat-tailed dwarf lemurs (Cheirogaleus medius). That discovery raised the very intriguing possibility that other primates—like humans—that don’t normally hibernate might be able to pull off the same trick. Lemurs are much closer to us, genetically, than other hibernating animals are. And that’s important, because if we want to understand how hibernation works in a way that might someday help people, it pays to study hibernation in an animal that’s as close to us as possible.

Mr. Casarett based this piece on an interview with my dad, Peter Klopfer, now an emeritus professor of Zoology at Duke University. Dad is also the co-founder of the Duke Lemur Center in Durham, NC, home to the largest collection of lemurs outside of Madagascar.

When I was a kid, my dad made repeated trips to Madagascar. My sisters and I took it in stride, never asked questions about what he did there or what it was like. It was his work, right? What kid is interested in their dad’s work?

There was that time he came home with malaria. That got some attention. But still, even as my sisters and I got older–research, ho-hum. Yeah, the lemurs are cute. Can I borrow the car?

Luckily, my sons were more interested than I was. First one, at age 16, then the other, at 19, joined his grandfather on one of those research trips. I learned what it was like, doing that hands-on research, speaking bad French with the locals, hearing the scary fossa chuckle as you walked the dark path through the forest to the outhouse at night. And I finally started paying attention.

The fat-tailed lemur my dad’s been studying doesn’t play much of a part in the movie. It’s no more dramatic than its name. But it IS cute as the dickens. 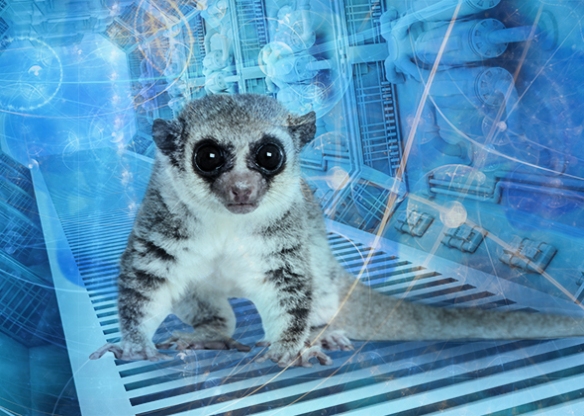 Mr. Casarett does a wonderful job of walking his readers through the science as my dad walked him, literally, past the darkened cages of the Duke Lemur Center, and back into the bright North Carolina sunshine. My sisters and I spent hours of our childhood at that center, back before it was a major tourist attraction, when there was no need to “sign in” at the front desk because there was no front desk at all, just a bunch of earnest researchers and keepers doing their work. When we could even pat the lemurs or feed them by hand if we wanted to–watching those sharp teeth, of course. When we had no idea that the place my dad had co-founded would one day be working on such…well…mainstream, high-interest science.

The article concludes with a wonderful sequence that captures both the interviewer’s curiosity and my dad’s character.

Klopfer and I are back in the parking lot now, standing in front of my rental car, when a thought occurs to me. We’ve spent the last couple of hours talking about the physiology of hibernation. So I’m wondering…

The question seems to surprise him. Klopfer strokes his beard, deep in thought. Under the hood of a rain parka that obscures his eyes, he looks a little like a wizard, if wizards dressed in Gore-Tex and track suits.

Finally he nods. “I would think so.” He grins. “Otherwise months of hibernation would be pretty dull, don’t you think?”

I agree. So there’s hope for us all. Not only might it be possible to put humans in suspended animation, but that’s a lot of dreams to look forward to. Let’s hope they’re pleasant ones.

Yup–that’s my dad. Kinda proud of him. Let’s consider this post my way of saying sorry for not being all that impressed when I was a kid.

Have you seen the lemur movie? Have any thoughts about the potential of this research? Or want to sound off about your own filial pride? Please share.