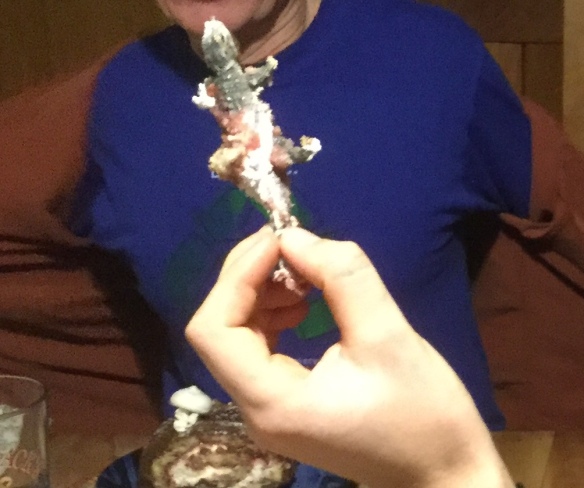 “Could someone lick me clean, please?

Oh, why’s he covered in whipped cream and jam? Therein lies a tale. Allow me.

Ali joined our family a couple of years ago when the Mate was out doing yardwork. Spotting a lizard near the compost bin, he decided to catch it, in honor of Wing Son One, who does such things. So he stalked it, for several minutes, before realizing…

a) it was plastic

b) it was an alligator, not a common lizard,

So he brought it inside. Of course I decided to place it under Son One’s pillow the next time he visited. (Gratifying yell of surprise.) Ali then showed up successively in…

a) the soap dish in the shower

b) my tin of Earl Grey

The hiking boot prank was especially good, because I was putting on that boot at the visitor center of Haleakala on Maui, last winter. So I sent Son One this photo of “Ali in Paradise”:

Later, he took a hula class and attended a luau.

From Maui we continued our Epic Journey to New Zealand, so there I took another photo of “Ali with Kiwi Mate”:

This past summer, both sons + Mate gathered in Vermont for a construction blitz on our cousins’ “new” old house. Ali flew there in a care package of cookies, to make a legendary appearance inside an ear of corn the Mate was shucking. (Sadly, no picture of that.)

Don’t know how Ali made it back to the Wet Coast, but he reappeared this past month, folded inside the ferry commuter ticket in our glove box. I decided Ali must have a special Christmas. So I stuffed him inside the yule log cake (Buche de Noel) I was creating. 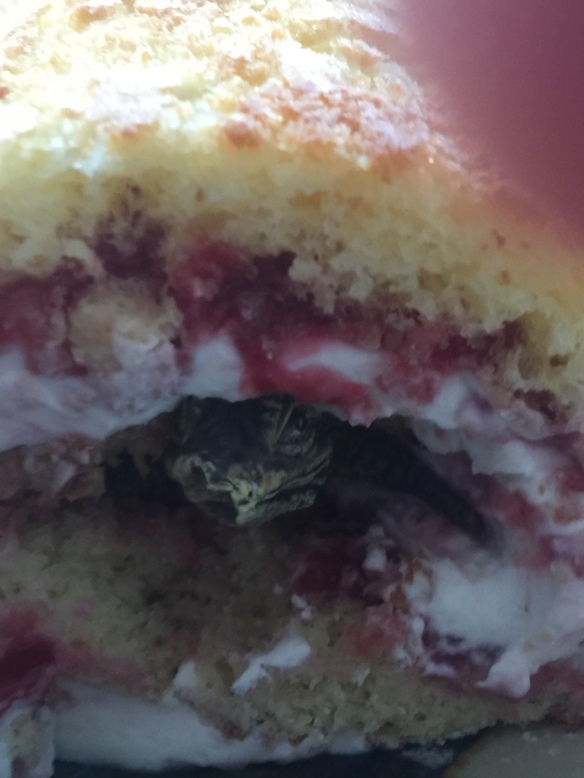 Don’t eat too much whipped cream in there!

Of course I made sure that one of our sons got the “special” piece of cake. (Son One got the honor.) 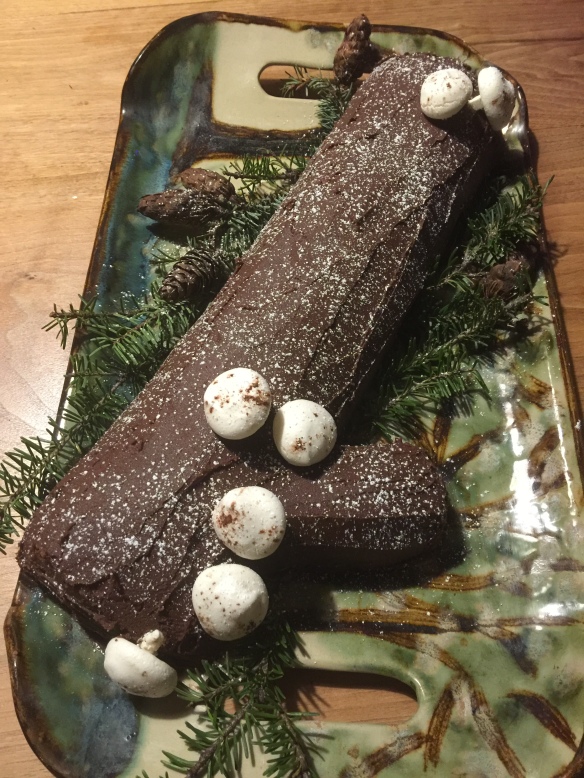 Alligator? What alligator? Have a slice of Yule Log! Merry Christmas!

We actually borrowed this idea of family pranking from our Vermont cousins. They did the same thing with an evil-looking doll they called “Malice.” The idea of finding a creepy doll inside, say, one’s freezer, veers too close to heart-attack-land for my taste.

But a cute little alligator? All he does is make us laugh, and think of how much we enoy each other.

Anyone else out there have an ongoing family prank to share? Anyone want to start 2018 with a new tradition? Be sure to take pictures!