Self-published. Independently published. Whatever you may call it, I call it: Time to Make a Book.

I’ve already written one. Two, actually. The Flying Burgowski introduces Jocelyn Burgowski, whose only solace from a family crumbling around her are her breathtaking flying dreams–until, on her fourteenth birthday, those dreams turn real and she launches into the sky…only to discover that supernatural powers are not always enough to heal the damage of old secrets. Book Two, The Flying Burgowski Sister, finds Jocelyn pitted against an enemy bound to destroy Flyers and anyone else who challenges “normality.”

Both manuscripts have been critiqued and revised and beta-read multiple times. The only thing holding them back from their “book” destiny is, I have discovered…my own fear.

What if I’m giving up too early on traditional publishing? What if I tried a little harder to snag another agent? (Used to have one; we parted company amiably; won’t bore you with the details.) What if my beautifully-crafted book gets lumped in with all the other books that show, shall we say, a little less attention to craft?** What if I can’t handle the technology of self-publishing? All that scary uploading! Eeek!

[**I just read this on someone’s self-pub blog: “I would spend some serious time revising your manuscript. You could also pay someone to edit for you. I didn’t, but…I felt confident that I had caught all of my grammatical errors and when I read through the book after receiving my copy, I was happy about the work I had done. Also–the book still had some errors. I had gone blind to my own work.” Grammatical errors–are you kidding me? What about the book’s content? Yikes. This is what gives self-pub a bad name.]

But this is the week where I finally tell those fears to shut up. I’m in. I’ve done my research. I have a terrific support system: my writing group; Kristen Lamb the WANA Mama and my WANA-peeps at WANA.com (shout-out to my WANA113 fellow Hotel Californians!); fellow writers from the Northwest Institute of Literary Arts. And let’s not forget you guys, my loyal readers! You’re ALL going to help me. Thanks in advance!

Nine months ago when I signed up for Kristen Lamb’s blogging class, I made these goals:

By the end of the class, I will not only be blogging 2-3 times a week, I will enjoy it.

In one year, my first book will be published, if not traditionally, then independently.

I’ve done my research, and I’m planning to go with Amazon’s CreateSpace because techno-wusses like me seem to find it pretty user friendly and, more importantly, it makes actual BOOKS you can hold in your HAND. I’m contacting a professional book designer, having been warned by my friend Iris Graville against using homemade art for the cover. I’m talking to my local independent bookstore about selling my books. And I’m telling YOU GUYS, so you can cheer me on and be ready to embrace Jocelyn when she makes her debut.

The day I made this go-for-it decision, I went for a walk in the coastal woods near my house. After several hours lost in cyberspace, reading self-pub blogs and Twitter advice, I needed a little reality fix. And I noticed this madrona tree, which I have passed dozens of times. 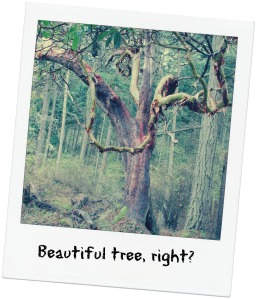 It’s supporting itself. That crazy branch makes a complete loop, then rests itself on its own coil, takes a breather…and keeps on growing upward!

I decided this was MY METAPHOR. After striving for traditional publication, after landing an agent only to see him lose heart in the shark-infested waters of New York, after quailing for so long at the potential stigma and the hard work of self-publishing…I have made that loop and I’m ready to support myself in growing on UP.

And you guys? You’re the minerals in my soil, ok, and the sun on my branches!

Seriously…Who do you count in your corner when it’s time to put on the big-girl panties and stride out into scary territory? Who are YOUR soil & sunshine? Or just let me have your thoughts on the whole self-publishing adventure. I LOVE hearing from y’all.

12 thoughts on “Diving In: Publication, Here I Come”