In case anyone’s wondering where I’ve been for the past few days–no, I did not zoom off on another vacation while forgetting to blog ahead. I’m back at work, ok?  For a former teacher, the idea that “work” now means playing with dough and chocolate is pretty darn delightful. But last week the delight caught up with me.

See, Holly B’s reopened last week under new ownership. I cut my road trip short to fly home to prep for the opening, and I have no regrets. It was a BLAST, being in on the ground floor of a new enterprise (or a newly-imagined, beloved old enterprise, since Holly B’s turns 40 this year).

It was also EXHAUSTING. The reason I haven’t blogged yet? I’ve been resting up.

Long story short: we’ve switched croissant recipes. Turns out this new one involves more than twice the number of steps as the old one (mix, rest, roll, encase butter, roll, chill, roll, fold, chill, roll, fold, chill…ah, darn it, I’ve lost count, but I’m pretty sure we don’t have croissants yet…). It also takes approximately 15 times the arm strength. That. Dough. Is. STIFF. 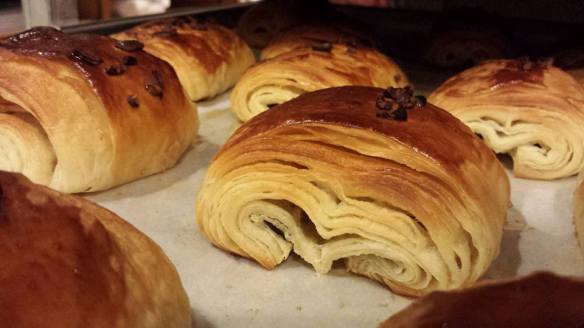 But just look at all those layers! (remaining images courtesy Ann Hoag)

Now, I’ve been doing my little weenie weights and push-ups like a good girl, but I’m a distance runner, people. Let’s just say my arms are NOT responsible for my Personal Bests.

…and these…Worth the sweat. Totally.

At one point, mid-way through the second day’s croissant dough batch, around slab number 9 or thereabouts, I started whining like a two year-old. If my younger and WAY STRONGER colleague Ann hadn’t been there to shoulder (and bicep, and tricep) the dough burden, our poor new boss would have been there finishing it herself at midnight, ’cause my arms were DONE.

The good news? The new owner is buying a “sheeter” to do our rolling for us. The bad? It won’t be here for another three weeks at least. So, I guess the better news is…I can quit with the weights and the push-ups for now. This croissant dough will be my free gym. 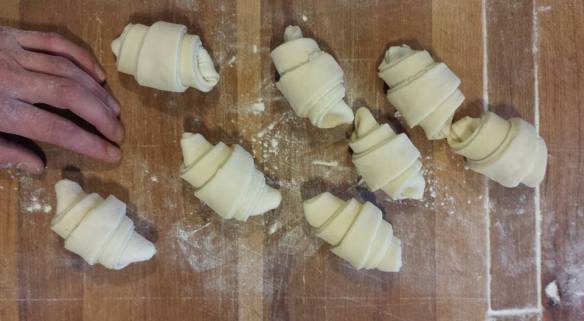 Oh, you look all sweet and innocent NOW, you little boogers…

Seriously, though…I LOVE my job. I am the luckiest tired lil’ baker in the west. And if I don’t blog again for awhile…well, now you know why. C’mon, sheeter!

3 thoughts on “Love & Butter & Muscle: Who Needs The Gym When You Have a Bakery?”