My first research stop on our just-completed journey back to New Zealand was a sheep station. Previous stays in New Zealand had involved mostly towns or national parks. I needed to learn more about the rural life. And although NZ has huge (and growing) beef and dairy sectors, I needed the good ol’ pastoral life of sheep.

And I did learn a LOT–not without a bit of sheepishness myself.

An internet search turned up the perfect solution for my research needs: a farmstay at Dunstan Downs High Country Sheep Station: nearest town, Omarama, itself not too far from Aoraki/Mt. Cook, in the middle of the South Island. 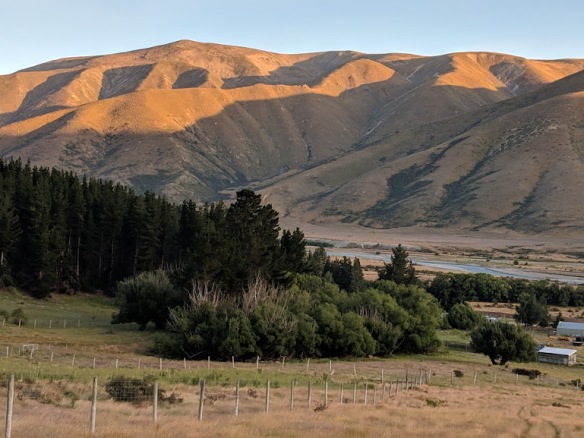 Home, home on the range

Sheepish Realization #1: “Upcountry” sheep farming among 6,000-ft. mountains is very different from “downcountry,” on the east coast. Where my novel is set. So I’d more or less taken myself to Montana to learn about farming in, say, Arkansas. Oh. But the east coast is…right over there!! Who knew such a small country could contain such contrast?

I also learned that the live-action version of “Mulan” had just been filmed right here.

Sheepish Realization #2: Having scheduled this trip based on my own free time, I hadn’t bothered to learn what would be going on at the sheep station in mid-January. Turns out: nothing. Lambing was long past, as was mustering; shearing hadn’t started yet. Oh.

Well, never mind. The Innes family, who runs Dunstan Downs, was absolutely delightful, taking the time (which they actually had in this lull) to drive me around their enormous holdings, answering every one of my naive questions, plus those I hadn’t even thought to ask, like, how do you muster by helicopter?

Two generations of the Innes family, plus other guests on their deck

mustering = round-up (and yes, they have sometimes used helicopters to drop shepherds off onto mountaintops, and even to help herd)

crutching = shearing the dags off a sheep

dags = the nasty, crusty wool around the sheep’s bum

strong-eye = what a good sheepdog has, the ability to mesmerize the sheep into doing its will

The stay itself was a real home stay. Meals were with the family, full-on Kiwi roast, pavalova, the works. (Sorry, no food pictures–didn’t want to be obnoxious.) And my bed had belonged to one of the Innes children.

Just as cozy as it looks

Also not pictured: sheep. I mean, come ON. You know what sheep look like! But I did learn why merino is marketed as a separate brand from other wool…and that sheep farmers consider merinos pitiful when it comes to hardiness: “They’re dreadful mums. They’ll just walk away from the lambs.”

But my biggest set of Sheepish Realizations came on the second evening of my stay. After being toured around a bit, I left Tim & Geva alone to get their hospitality chores done–one of their lodging options includes this adorable wagon: 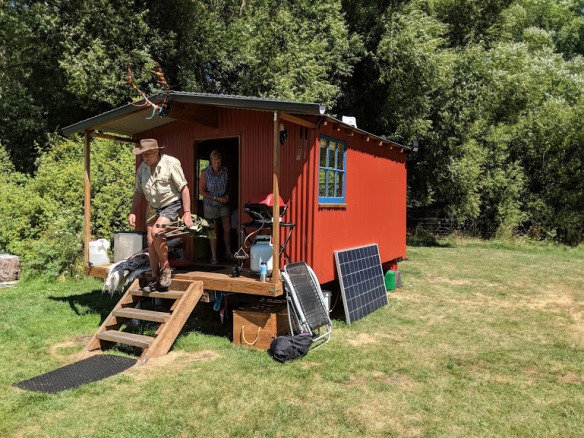 and got some writing done at the edge of their river.

I know, right? If you book a stay in that wagon, this spot could be yours.

In order for me to experience a fuller extent of their lands, and get my exercise,Tim arranged to drop me a few miles down the road so I could hike home. So around 5, with the summer sun still high, off I set into the hills, with Tim’s instructions rattling vaguely in my head, something about following the creek till I hit the track (track = trail). Last thing I remember him saying: “From the top, just follow your nose downhill and she’ll be right.” And maybe something about a fence.

I followed the creek, hopping over it a couple of times, stopping to drink out of as Tim assured me I safely could. (Tim, if you’re reading this…so far, so good. No giardia yet.) All was well, if a bit scratchy…till the creek disappeared into a mess of matagouri. I was swearing too much to take a picture, but…

No way was I pushing through that. The trail must be elsewhere. Feeling fit and confident, I decided to go straight up the hill and spot the trail from there. And I do mean STRAIGHT UP.

Impossible to capture the steepness of this slope in a picture. Let’s just say I ALMOST said farewell to my water bottle.

Stopping to ease my shaky legs, I looked down to see–oh yeah, there’s the trail all right: on the other side of a cliff and a ravine from here.

There was nothing to do but continue up, praying that I would eventually meet up with the trail at the top. 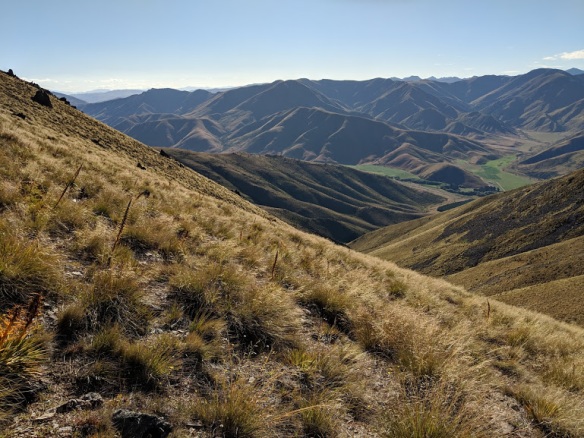 Spoiler alert: I did.

Ah, the top at last. Now, what was that about a fence? Follow it? OK, but first I’m crossing over to where the track looks flatter. I’ve HAD IT with climbing. In the local parlance, my legs are “knackered.”

Ah, the fleeting bliss of being up top. Okay…down we go.

You can probably guess what happened next. The fence led me, in fact, away from Dunstan Downs, and by the time I realized it and cut across the tussock, lo and behold: another thorn-filled ravine separated me from the ridge I should have walked.

By now I’d been gone a good two hours, maybe more. Determined not to embarrass myself by being late to dinner (planned for 8:30), I decided just to head STRAIGHT DOWN, damnit, and walk home on the road.

At least the view was nice. Too bad I had to keep eyes down to watch my footing.

Did I mention the matagouri? It grows in great big bushes, yes–but the smaller version also awaited my every footfall, disguising itself in the lengthening shadows. Trying not to trip on rocks–every good hiker knows going down’s when you have to pay attention–I bulled my way instead through the thorns. And tripped anyway.

When I finally reached the road, legs bleeding, there was Tim in his Land Rover, out scanning for me with binoculars. It was 8:40. Had I not turned on the radio he’d given me? he wondered. Oh. Forgot about that. (Truthfully: didn’t want to worry my lovely hosts.) And what about the fence–hadn’t I kept it on my right?

Oh, so that was the thing about the fence. I didn’t have the heart to tell him I’d lost the trail at the very beginning.

For dinner Geva served venison Tim had shot, and warm raspberry-chocolate brownies with ice cream. I would say it all tasted like humble pie to me, but it was too delicious…and my Kiwi hosts were much too nice to tease me.

So if you happen to travel to central Otago, remember: Dunstan Downs High Country Sheep Station. And keep the fence on your right.

4 thoughts on “Return To Kiwiland, Part V: In the High Country, Better Sheepish Than Cowed”