When we spent a sabbatical year in New Zealand back in the ’90s, we spent it with Sons One and Two. On this most recent return, we invited Son Two to join us, and, being between jobs, he eagerly accepted. But for him, this trip wasn’t really a “return,” because on his first visit, he looked like this:

He was four then. He remembers NOTHING. Clean slate. When we traveled around, we generally went from playground to playground. 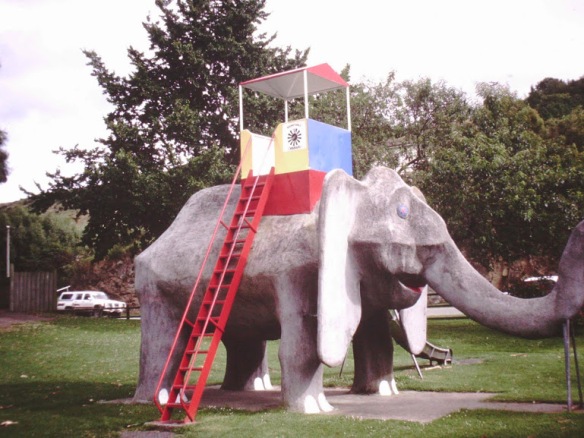 Every little town had one–still does!

And when we hiked, we couldn’t go very far.

Back then I had to carry the boys over the swinging bridges–they didn’t like the bouncing.

Now, having grown up in the family Church of the Great Outdoors, Son Two knew he was up for a lot of hiking on this trip. Not the kind of thrill-adventure New Zealand’s become known for. (After all, Kiwis did invent bungee-jumping, or “bungy” as they spell it.) He likes to hike.

Even in the rain (on the Routeburn, one of NZ’s Great Walks)

But I think we were all relieved when he managed to peel off and enjoy some good 20something-style touring on his own. Not rafting, though we were all tempted… 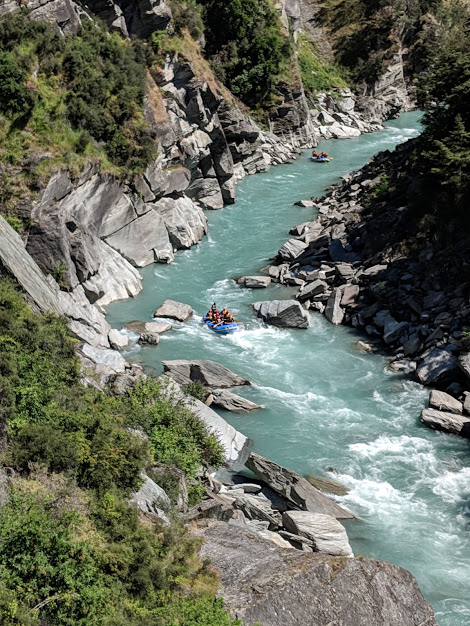 Ooh! We would have done that. But this trip was for research, not adventure.

As it happens, our good friends Nancy and Graeme live near Queenstown, NZ’s crown jewel of adventure touring. Their house is right above the Shotover River, where jetboats filled with screaming tourists roar up and down throughout the day. But Son Two didn’t need to pay for a jetboat ride…because Graeme has his own! A true Kiwi.

They really were just a blur.

Lake Wakatipu in the background

and spent a late night on the town with Graeme, capturing a scene I missed by going sensibly to bed. 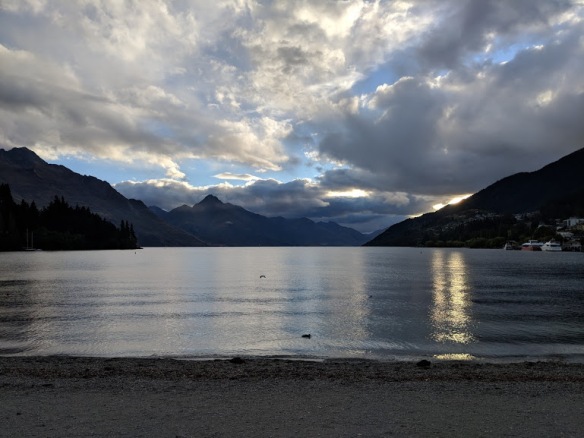 It’s high summer, so this is around 9 pm.

But his true millennial attributes came to life when he announced he wanted to bungee-jump. Since he was paying for it himself, we had nothing to say on the matter (Graeme did use to work for A.J.Hackett, the bungee-inventor himself, but no more–so no discounts, sorry).

Yes, I have a video of the actual jump. But no–I didn’t want to upload it to YouTube just for the purposes of imbedding it in this blog. I’ll only go so far to violate my sons’ privacy. 🙂 These stills will have to do. 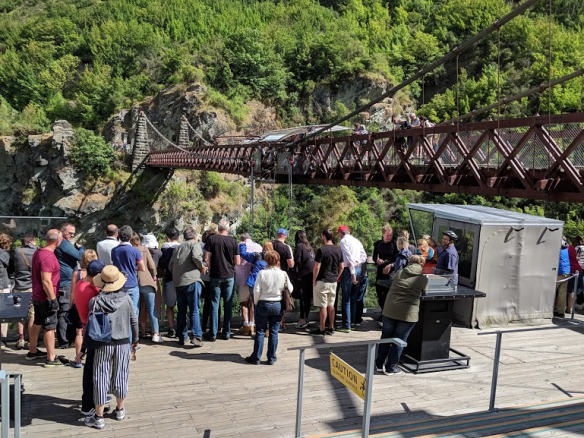 Just in case you need some…

Ready for the plunge!

Good news: he didn’t break his neck. Nor barf (“chunder”) after his night out with Graeme. Phew.

After that, it was back to hiking. 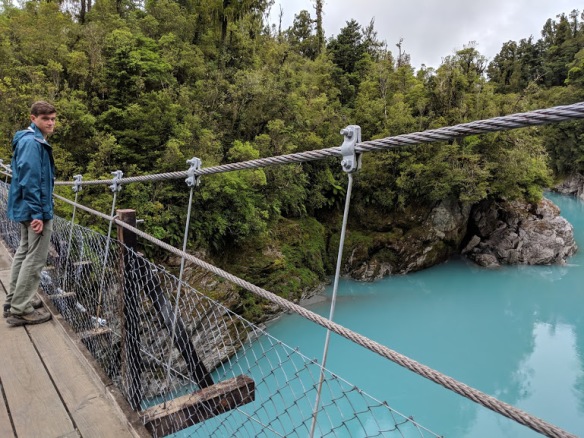 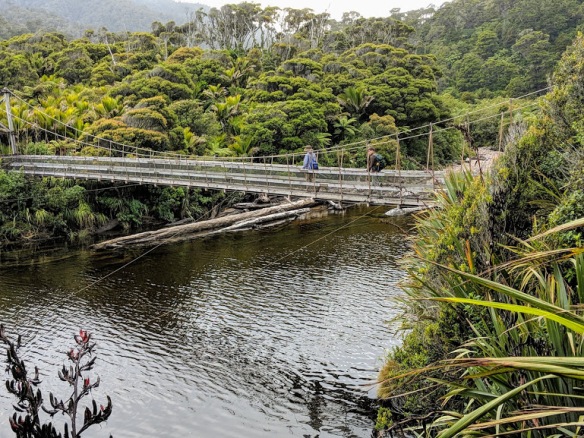 Heaphy Track, west coast (up north). Notice he no longer needs to be carried over swinging bridges!

But up north, in Abel Tasman National Park, I think we finally impressed him. 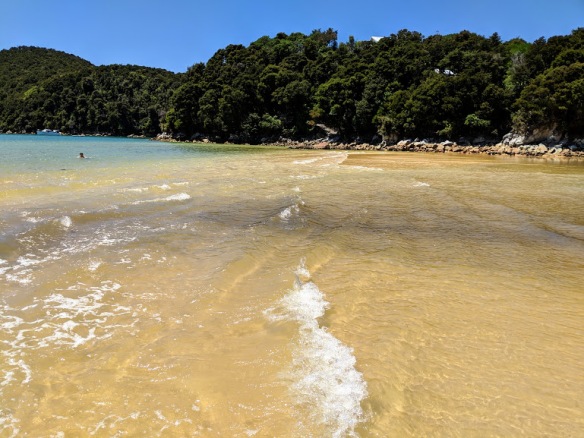 Maybe a little less sun for us oldsters.

Tramping around an inlet along the coastal track 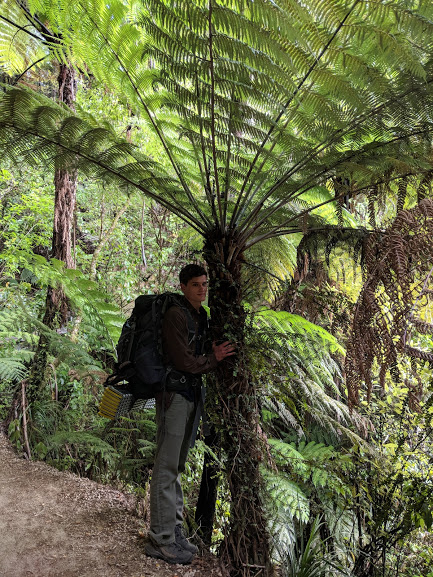 Happy to embrace his Hiking Heritage

Giving our sore feet a rest after all that hiking (tramping), we did some paddling in Marlborough Sound (Totaranui). 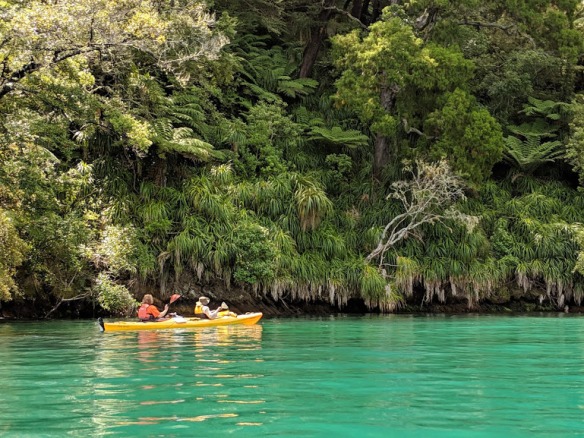 The Mate, enjoying the lack of mosquitos.

That won the Official 20something Seal of Approval.

But when we got back to town, the lil’ tyke showed he can still enjoy a good playground. 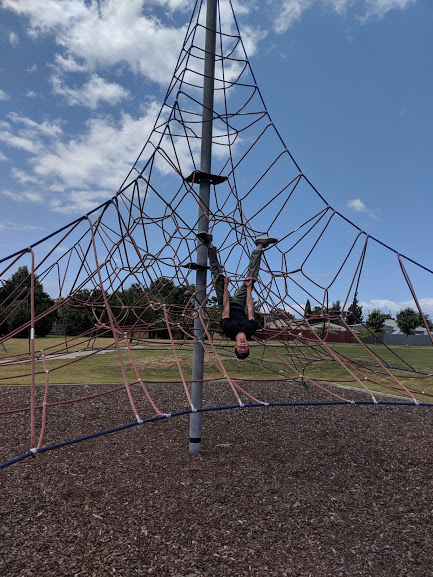 2 thoughts on “Return to Kiwiland, Part VI: Middle-Agers + 20Something = A Trip”