Having colorful parents who raised you and your siblings in unorthodox ways is considered, these days, a piece of literary luck. Hey, look at you—you have memoir material! (Thinking Jeanette Walls’ Glass Castle, Tara Westover’s Educated, or, casting farther back, My Family and Other Animals by Gerald Durrell—which my own father read aloud to us.)

Don’t worry, this isn’t a pitch to buy my memoir; I’m not writing one. But if I did, the Aldabra Winter would fill a good chapter. And since it really is a good stand-alone story, what better place to share it?

I’ve blogged about my marathoning, Civil Rights activist, lemur-studying, poetry-writing, horse-riding, Quaker school-founding—oh, heck, colorful parents before. But I’ve never written about the Aldabra Winter of 1976-77, when my parents abandoned my sister and me for ten weeks to disappear into the Indian Ocean.

Okay, that was unnecessary drama. I just enjoy thinking of the story that way. In reality, I was 15, my sister was 17 (with the all-important driver’s license), and we had both a Duke student living with us and my grandmother living adjacent. Hardly “abandoned.” But still. These were the days LONG before internet, and Aldabra did not do phones.

So where is Aldabra, and what were Martha and Peter Klopfer doing there? For that I’ll turn to my parents’ Aldabra Journals, which they kept back then, written longhand, and which my dad is now digitizing one by one, a kind of 42-years-later blog. Take it away, Dad.

“Among students of animal behavior, it is commonly believed that if one concentrates ones studies on a particular species, one comes to resemble it.  Doesn’t Konrad Lorenz remind you of an arrogant gander, Niko Tinbergen of a graceful gull, and Karl von Frisch of a preoccupied honey bee?  Given such Noble [Nobel?] examples, we could be forgiven for accepting this belief and thus diversifying our interests so that, by switching from ducks to deer to damselfish, we could avoid a resemblance to the goats which had been our primary subjects.  However, insofar as the U.K.’s Royal Society was concerned, we were still goat-people, so when they and the Smithsonian decided to deal with the depredations of the goats on Aldabra Atoll, we were the ones they called.  The goat population on that isolated island had increased considerably in the past several decades and the fear was that this would adversely impact the large land tortoises, a threatened species, that shared the atoll.

We had been looking at the process by which newborn kids bonded to their mothers, a process that depended on events that were limited to a very short period of time: if bonding did not occur within 5-10 minutes after parturition it would not take place at all. We had reasons to believe these events were mediated by the pituitary hormone, oxytocin, but caprine oxytocin was not commercially available, and we were unwilling to sacrifice animals merely to obtain extracts from their glands.  But, if the goats of Aldabra were due to be slaughtered anyway, harvesting their pituitaries would be a sensible act.  The Royal Society proposed to allow this if, in return, we would document the impact of goats on the tortoises.  With Meg Gould (now Dr. Meg Burke), a doctoral student who was prepared to spend a year in the field, we agreed to undertake the task.

Aldabra is a fly speck in the Indian Ocean, some 400 kilometers northwest of the giant island of Madagascar.  The atoll resembles a flattened doughnut, 30 kilometers long, its width varying from 5 to 10 km.  Most of the interior, the doughnut hole, is a shallow lagoon that connects to the sea through three channels that dissect the rim of the doughnut, dividing it into 4 separate islets.” 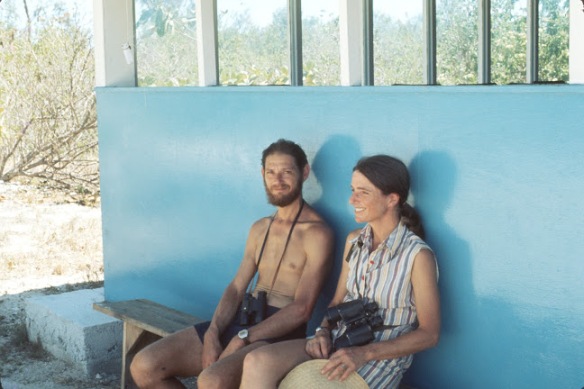 Dad and Mom, ready for some serious goat-watching action

Let me take the mic back here to explain, in case you haven’t picked up on it: my dad is an academic, and both his speech and his writing tend toward the, shall we say, multi-syllabic. So let me zip through this next part to say that simply getting to Aldabra was an odyssey in itself. Starting in December of 1976, they left from L.A.–three hours after completing a marathon race!–flew to London, then Nairobi, and finally to Mahe, the main island of the Seychelles. Can you imagine how cramped and sore they must have been? Then they discovered their luggage was missing. OK, back to Dad.

The day began with a desperate search for clothing to replace what was in our lost luggage, a search that was largely unsuccessful as local stores only offered sizes appropriate for the local population, who are considerably smaller than we.  But, miraculously, before the day was out, our wandering suitcase was located and we could turn our attention to confirming the arrangements for the final leg of our journey, a three day boatride on the freighter that, twice each year, resupplies the garrison on Aldabra.

The boat in question was an ancient 500 ton tub, the Nordvaer, which plies the Indian and South Pacific Oceans.  We clambered aboard and were escorted to the Captain.  “Sorry”, was how he greeted us, “my First Mate is sick and must be hospitalized.  Maritime law in the Seychelles forbids freighters lacking a Mate to carry passengers”. With the next available trip a full six months distant, we were stunned.  Somehow, in the lengthy discussions that followed, someone came upon the idea of enrolling us in the seamans’ union and then signing us on as members of the crew.  We dashed to the relevant maritime offices, signed various forms, and were officially listed as “supers” aboard the Nordvaer.  The title seemed a bit exalted to us, until, later, we learned “super” stands  for “supernumerary”, and meant we need not stand watches nor handle the engines, but at least we could ignore signs that read “no admission except for crew”.

Mom with the freighter Nordvaer

Stay tuned for the next installment of Aldabra Journals! (Or, as I like to call them, “Where In The World Are Peter And Martha Klopfer?”)