Back from a quick backpack trip with my Ironwoman goddaughter, straight into a Bakery Blur, and tomorrow I’m off again for my annual Girliepeep Get-together. I could blog, or I could pack. You know what? I’ll see you in a week. Be well and happy, everyone!

Who knew? I’m part of a tribe: GRITS. Girls Raised in The South.

I just learned that from a bumper sticker, back in my home state of North Carolina on a visit with my besties from high school. The fact that I never heard this term when I lived there, 24 years ago, tells me something.

Roots change. Or rather, our sense of where we come from, and how we feel about it–that changes. Continuously, it turns out.

When The Mate and I moved, in 1990, it was largely out of frustration. North Carolina had just re-elected Senator Jesse Helms for a SIXTH term. A baldly racist campaign, playing on white fears of preferential treatment for blacks, left us feeling shaken and soured. So much for the “New South.”

Then there was the weather. We were both distance runners. The only way to get our workout in during the summer was to be out the door by 6 am. That got old real fast.

In the Pacific Northwest, we found a home, both culturally and geographically. I developed a mantra for explaining to people how I felt about the South.

Now, thinking back over the sweaty weekend I just spent with my girls on the coast, I realize my non-nostalgia is more nuanced. Here are some other things I’ve missed:

#1. Flat-out Wackiness. The South has a special affection for “characters.” Despite its insistence on conformity in most issues of dress and religion and Livin’ Right, if you’re a “character,” you can not only get away with quite a bit, you’re loved for it. Example: The Mary’s Gone Wild Folk Art compound we discovered. Part connected treehouses, part structures of bottles stuck in mortar–think End of Star Wars III meets The Burrow from Harry Potter, with a little Gothic Pippi Longstocking thrown in. 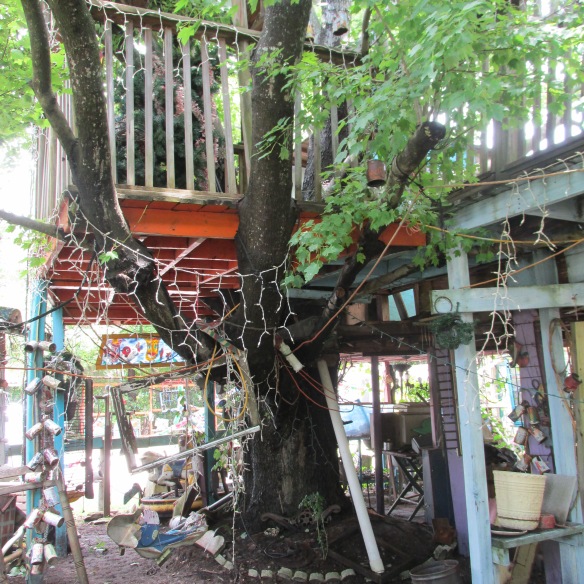 #2. Summer Veggies. Having not been back in the summer for years and years, I had forgotten about SWEET sweet corn, velvety slabs of ripe tomato, basil bursting weedlike out of gardens. And the watermelon? Makes me feel like crying just thinking about it. We don’t get enough sun here in the Pacific Northwest to grow hot-weather crops that taste the way they were meant to.

#3. Quaint vestiges of respect built into conversation. “Yes, ma’am, these peaches are ripe.” And my mom, who tutors a guy older than me who’s finally learning to read, says he calls her “Miss Martha.”

#4. Did I mention wackiness? These ironic flamingos decorated our rental house:

Is that even legal?

Of course I bumped into several items to add to my WHAT I DON’T MISS list, namely:

#1. Smoking. YECCCCCCCCCCCCCCCHHHHHHHHHH. People still smoke a lot more in NC than they do here. And there’s still tobacco growing every old where.

#. Humidity. Yeah, that one’s not new. But I had forgotten how much my HAIR hates it. I turned into a sticky, grumpy Mufasa. “Muuu-FASSS-ahhhh!”

But enough with the lists. I’m home now, and I’m curious about your own love-hate relationship with a place you once called home. What do you miss? What do you NOT miss? Share!

I’m not here. I wrote this several days ago. I’m with my Girliepeeps.

How many of you over-20 folks get together with old friends on a regular basis? If you don’t, I’m here to tell you: it’s never too late to start.

My three best friends and I graduated from high school in 1979, ’80, and ’81. We went to college–off and on, some of us–staying in vague touch here and here. We went to a couple of each other’s weddings (only 2 of us 4 had them).

Then we lost touch, pretty much. For 15 years.

In 2002, I commented to my Mate that a friend of mine had annual get-togethers with her childhood friends. Another did the same with friends from college.

“Yeah, right. We’re way too scattered. North Carolina, Georgia, Michigan, Washington–where would we all meet? It’d be way too expensive.”

I love my husband. He values family and friendship above anything. Is it expensive for us to fly once a year for “nothing more” than 3-4 days catching up with each other? Yes. It’s also priceless.

Reunion #1, Michigan, 2002: we spent 48 solid hours talking, with short breaks for sleep. We all got sore throats.

Massachusetts, 2003 (where one of us has a sister with a home we could borrow): We kayaked on the Deer River, establishing a  tradition of paddling which we’ve stuck with every year since. (OK, that one river in Georgia was too low for paddling, so we tubed…but close enough.) 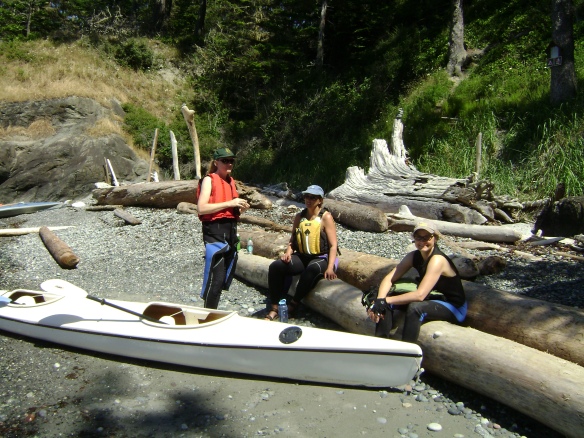 Rivers, oceans, we’re not picky–just give us paddles. And picnic lunch.

Washington, 2007: one of us brought recipes she wanted to share, establishing another tradition: cooking for each other. Champagne peach soup, anyone? Sweet  potato gnocchi?

Georgia, 2009: the host gave everyone little tea infusers, establishing the custom of host-gifting. (I already have my idea for next year, but it’s a secret.)

We’ve developed a few other traditions along the way. We try to have one evening with the spouse/partner/family of the host. We try to do something cultural: poetry reading, kangaroo rescue center (no, I am not making that up). 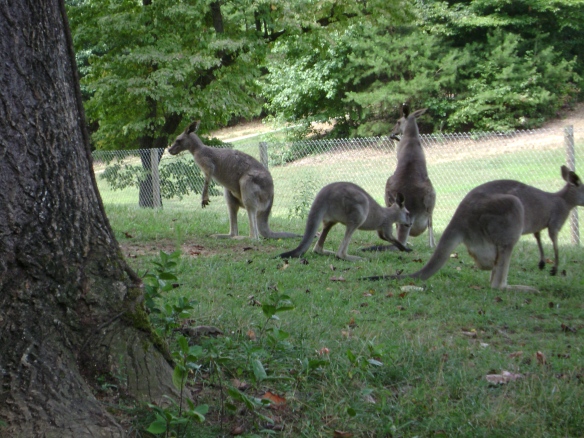 Who knows what new tradition is developing RIGHT NOW, as you are reading this and I am with my girliepeeps on the North Carolina coast?

I’ll get back to you on that.

So, reunions, anybody? Do you have them? With family, or with friends? How often? What are your traditions?

So I emailed my guitar teacher last week to cancel the week’s lesson. “Heading to Massachusetts,” I told him.”It’s time for my annual get-together with my three best friends from high school.”

Weeellll….not exACTLY. But he did get me thinking about how we could spice up what is otherwise, typically, four days of lying around, cooking, sharing book and movie titles and going on sedate hikes or paddle trips.

I know, I know–nobody’s idea of fun, but bear with me here. Without divulging our ages, I can safely say that my 3 besties and I add up to more than a 200 year-old when we get together. So we’re all due for one of those…procedures. Why not increase the pleasure factor up to not-quite-negative numbers by doing it with some buddies? We could line up our clinic beds real close, watch each other’s scope screens, have a contest to see who gets done fastest…I better quit before the disgusting puns start.

“Hey, this ain’t so bad with you guys here!” (courtesy Pinterest

Same as #1, but with a simultaneous mani-pedi. Hey, if you’re just lying there…

How about a facial while we’re at it?

“Then, you pinch the dumpling tightly so it won’t leak, and…OH yeah. OH my. Talk about pinching dumplings…!”

For the hardier, brainier gals…”SO… WHEN GATSBY SAYS THAT THING ABOUT OF COURSE YOU CAN CHANGE THE PAST…”

“ARE WE STILL TALKING ABOUT CHAPTER FIVE? I CAN’T HEAR YOU GUYS.”

“WE ALREADY TALKED ABOUT THE GREEN LIGHT.”
“OH, GREEN? LET’S GO THEN…”

OK, maybe forget about that one. 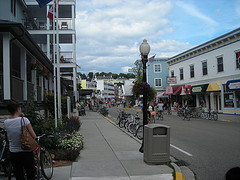 How about you guys? Want to share some fun girlfriend getaway ideas, real or unreal? What’s worked for you? What hasn’t? What would you like to try?