You know those times when you get so ridiculously excited about something you just have to blurt to the first person you see?

(If no…I gotta say, congrats on your self-restraint, but really? Try it sometime.)

I had one of those the other day. Rushing back down the path from the gorgeous portion of National Monument that is my backyard, I met a stranger walking my way. “I saw a sea otter! Keep an eye out for it!” I blurted.

He gave me what felt like a patronizing look–and I should know, having given plenty of those myself. “Those are river otters,” he said, kindly enough. “They’ve taken over the marine habitat, but they–” 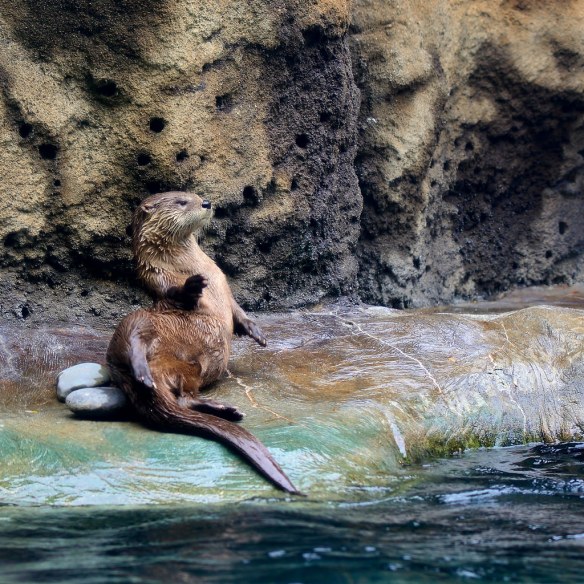 “No!” I interrupted. “I mean, yes, I know–you’re right, I’ve never seen a sea otter in these waters, but I just did!”

I went on to describe what I’d seen through my binocs (after zooming home and zooming back out again–don’t usually carry binocs on my walks): big creature, almost as long as a seal, floating on its back, flippery hind feet sticking straight out of the water, front paws on tummy, as though it were making itself into a floating tray. Silver face. 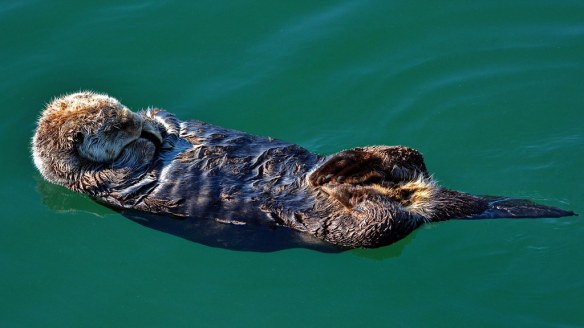 The guy switched to Interest Mode and hastened down the path.

We don’t get many sea otters in the Salish Sea. In fact, in ten years of several-walks-per-week, I’ve NEVER seen one. Special as I felt, I wanted to find out exactly how rare they were. Here’s what I learned from an article posted July 2018 by Rob Ollikainen in the Peninsula Daily News:

Most sea otters are spotted off the Pacific Coast at places like Destruction Island and Cape Flattery, said Erin Gless, a naturalist with Island Adventures Whale Watching.

“A few individuals, however, seem to be exploring more inland waters,” Gless said in a Monday news release.

“While it’s too early to determine what’s bringing these sea otters in from the coast, their presence is encouraging.”

Turns out the otter I saw–all by its lonesome, and it probably was, ’cause sea otters are super-social creatures–has already been adopted by some who’ve spotted it. According to this article and a couple of others I read, this guy is either “Ollie the Otter,” first spotted near Victoria in 2015, or else “Odin,” a one-eyed male seen more recently off San Juan Island. Since that’s much closer to me, I’m guessing Odin’s more likely–but I couldn’t quite see its eyes through my glasses. As for a close-up shot?

By the end of the article, though, my excitement got its comeuppance.

Anne Shaffer, executive director of the Coastal Watershed Institute, which studies the ecology of the nearshore near the mouth of the Elwha River, said the recent sea otter sighting was interesting but not unusual.

“There are otters that are off our shore, off the central Strait, one or two a year,” Shaffer said Friday.

A semi-resident sea otter was known to be living off the San Juan Islands for years. An adult male was living in the south Puget Sound, Shaffer said.

“There certainly transit our shoreline but they’re not abundant,” Shaffer said.

“It’s an interesting observation but not necessarily ecologically astounding. But they’re cool animals.”

Well, excuuuuse me for being astounded. Cool animals are welcome to do that to me any day. I’m also constantly on the lookout for ANY good ecological news, and I reserve the right to receive this otter as exactly that.