Our beautiful island and its sweet bakery, Holly B’s, were featured last week on Seattle’s KING 5 Evening Magazine. Here we are, lookin’ smooth:

Seeing this take on my life of Love & Butter, I am struck by a couple of facts:

How we roll…(photo by Stephanie Smith, Boss Extraordinaire)

I could go on, but you get the idea. Love & Butter, yes–but also sheer, dumb luck. I try very hard not to take that for granted.

The stupid thing is, I don’t even LIKE football. I’ve never been able to understand how any mom or dad could sit and watch their beloved kid getting mashed like that. They must be tougher than me.

And pro sports? Meh. Occasionally the supreme grace of the athletes or the adrenalin of a close game can cause me to forget my cynicism about the whole nasty nexus of money and steroids and over-hyped, under-educated teenagers that forms the base of the pro sports pyramid…but only occasionally.

So how can I be so damn proud of the Seattle Seahawks?

[IMPORTANT SIDE NOTE here for those who know me well enough to be asking  at this point, “Hold up–she’s a complete Carolina Tarheels nut. Where does she get off complaining about the ‘nasty nexus’ of anything sports-related?”

My response: I do see your point. Collegiate basketball fans, like, well, any fans, are not rational beings. Now may I continue?] 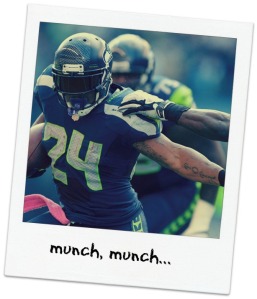 Really, though, I’m just excited for the city. Seattle is not a sports town, historically. It’s not really an anything town, historically, unless you want to go way back to 1919 and the International Workers of the World (only successful General Strike in US history! Go Wobblies!) Yeah, it’s famous for grunge, and expensive coffee, and more recently, public pot-smoking. But those interests leave a lot of folks out in the rain. (Ooh! Seattle weather pun!) Nothing brings together folks from ALL walks of life better than a winning sports team.

I love seeing Facebook pics of northwestern friends, far from home, still gamely decked out in Seahawks blue and green.

I love all the media chatter about which city is better, Seattle or San Francisco.

I love chatting with people in the market about Seattle’s killer defense.

I love reading that Seahawks fans are the loudest in the world.

I love seeing other folks’ eyes light up when I mention Marshawn Lynch’s arms…or the rest of him, for that matter.

So call me a fair-weather fan if you want. When it comes to football, I fully admit that’s true, despite the lack of any fair weather in last weekend’s victory over the Saints.

But when it comes to bringing people together? I’m ALWAYS a fan of that.

I am not a pro football fan. True, I’m not quite as bad as some of my island friends who claim not to know what “NFL” stands for, but, in the overall range of not-fan-ness, the only reason I’m not one of those annoying spectators who demand to know “Wait, why’s that guy doing that?” when you take them to a game is that no one’s ever going to take me to a game.

So I should be embarrassed to admit that I’m proud of “my” Seattle Seahawks because they set a world record last month. Well, not them, exactly. Their fans–a.k.a. “The Twelfth Man.” (See, if I were a COMPLETE and TOTAL not-fan, I wouldn’t know what that meant. So maybe there is hope for me, or no hope, depending on how you look at it.) They set a record for NOISE.

Yep, it’s official, folks. 136.6 decibels, breaking the previous record by 1.6  And the previous record holders, the hardy fans of the Galatasaray Soccer Club (that’s in Turkey, in case you were wondering) can try again next year, jolly good luck and all that.

What’s funny is, hearing this story gave me a rush of civic pride that continues to bubble up anytime anyone mentions the topic. How in the world can this be? Am I such an insecure Northwesterner that world attention of any kind that doesn’t mention “the Battle of Seattle” or the wimpiness of Steve Ballmer automatically pumps me up?

Gotta admit…I was just in New England, and I found myself keeping score: “There’s a Dunkin Donuts. But ha! There’s a Starbucks right across the street. We’re catching ’em! Oops, there’s another Dunkin Donuts…dang.”

Civic pride, anyone? Do you fall victim to it over silly stuff? Or do you save your “I Left My Heart in ________” moments for something more real, like when Boston rallied after the marathon bombing? Or maybe pride is pride and love is love, and it doesn’t even matter why?