I am SO blessed to live in a community where I know my farmers. Now I’m wondering: how many of you could too? The Bounty Project introduces its community to the folks who grow its food through short interviews, gorgeous photographs, and mouth-watering recipes to put all that yummy local produce and meat to use. Are you a small farmer, or a writer or photographer who cares deeply about farms and eating local? Read about The Bounty Project, then consider how you might start one in your own community.

BOUNTY: Lopez Island Farmers, Food, and Community will be released at an event at Lopez Center for Community and the Arts on Friday, Oct. 21, 5-7 PM. The beautiful BOUNTY Photo Exhibit will be on view and copies of the book will be on sale.

Join the CELEBRATION!  The photographers, the writer, and chef will be available to sign the book.  The book will also be available for purchase at the LCLT Annual Harvest Dinner the following evening, Oct. 22 and at the Lopez Bookshop.

This 124-page book combines photographs, profiles, and recipes for twenty-eight Lopez Island farms and farmers to present an intimate, behind-the-scenes view of what it takes to bring food from earth to table on Lopez Island.

Guess what, people: pork bellies are a thing! I mean, they’re not just some shorthand for commodities bought and sold on the futures market–which is the only way I’ve ever heard them referenced. No, pork bellies are…get this…really part of a pig that you can buy!

And turn into HOMEMADE BACON.

Vegetarian friends, you might want to stop reading now. Then again, I know vegetarians who make an exception for really GOOD bacon. (Yes there is such a thing as bad bacon, but it’s rare, and a travesty to boot.) So…that’s between you and your conscience, veggies.

I recently had the chance to buy a box of mixed pork products from local farmers trying to free up freezer space for the spring. The box, I was told, could include a mix of my choice of the following: roasts, stew meat, chops, sausage, and “pork belly for bacon.”  I didn’t really need any of the former, but that last phrase hooked me. When I inquired, I received a recipe plus instructions. The whole thing was to take about 10 days, and the ingredients were cheap and accessible. 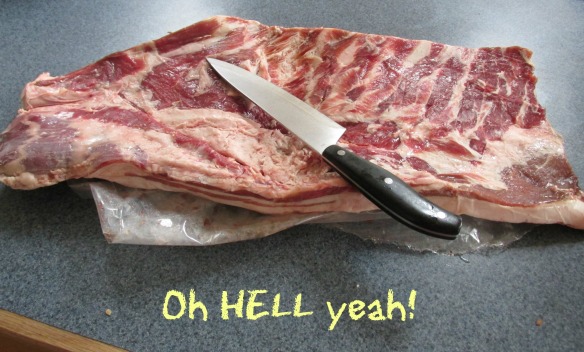 Why isn’t everyone doing this? I THINK it’s ’cause pork bellies aren’t generally carried by most stores–you have to order ’em. And then the process does use kind of a lot of fridge space. But it’s only for 10 days! And you could always use a cooler.

So: game ON. Step One: assemble your rub. (You can do wet or dry; my recipe is a mostly-dry one, though I added extra molasses.) My ingredients: kosher salt, brown sugar, garlic powder, cumin, red pepper. But there are plenty of other recipes on the internet to choose from.

Step Two: put in container. Most of the internet recipes had you put your belly bits in zip-lock bags, but my friends prefer a dry method, so I’m trying that. But I wanted to avoid aluminum (it reacts with the salt), so I had to cut my big 9-pound belly into thirds to fit it into my largest non-aluminum dishes. Hey, what’s better than one belly? Three bellies!

Step Three: refrigerate, and every day, flip your belly. That’s it–whether dry or bag method, that’s all you do. After 7-10 days, you cut off a bit, fry it, and see if it needs longer curing.

Of course, after the curing process, you can also smoke your bacon for that additional baconity. But my Mate with the degree in public health reminds me that those extra carcinogens can really be dispensed with. “Just CURE it,” he says. “OK,” I says.

Will I keep you posted on the belly-curing thing? You bet I will. See you in 10 days.