I could go on for awhile with the metallic puns, but I’m going to pass up this opportunity and just talk about how weird and wonderful it is all of a sudden to listen to professional sports chat.

But first a quick update, for those of you who don’t care/are too busy to pay attention to the NBA/aren’t sure which sport the NBA involves/don’t live with partners who watch a lot of ESPN/think that ESPN stands for something to do with Spain:

There’s this 84 year-old rich guy, Donald Sterling, okay? Very rich: billionaire rich. Owns a basketball team rich. The LA Clippers, to be precise. Also the kind of rich who can apparently have both a wife AND a 31 year-old girlfriend without that being a news story in itself.

Last week someone (who? Who? Ooooh, news story!) recorded a private phone call between Sterling and said girlfriend, V. Stiviano, in which he berated her for posting pictures on her Instagram account of herself standing with “minorities” .

Those “minorities”? Among others, current NBA star Blake Griffin and NBA LEGEND/philanthropic entrepreneur Magic Johnson. To Mr. Sterling, they are just “black people.” 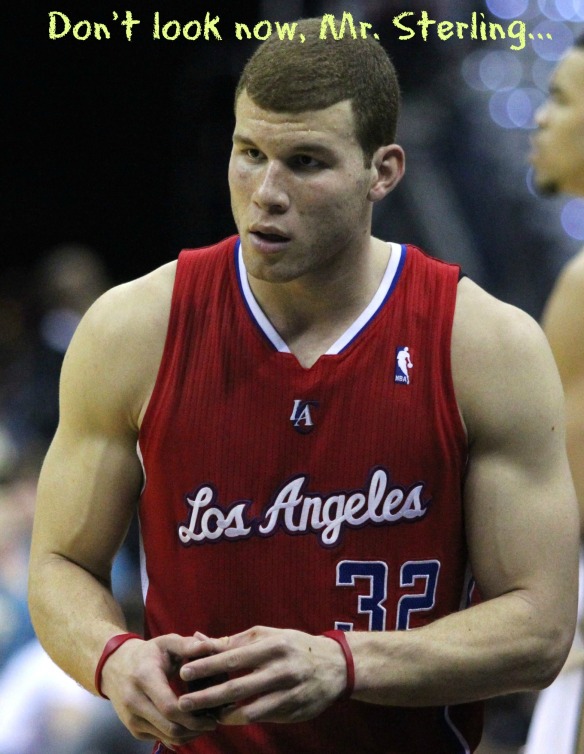 Here is the transcript of the tape, as offered by Deadspin.com (which also has video):

V: I don’t understand, I don’t see your views. I wasn’t raised the way you were raised.

DS: Well then, if you don’t feel—don’t come to my games. Don’t bring black people, and don’t come.

V: Do you know that you have a whole team that’s black, that plays for you?

DS: You just, do I know? I support them and give them food, and clothes, and cars, and houses. Who gives it to them? Does someone else give it to them?Do I know that I have—Who makes the game? Do I make the game, or do they make the game? Is there 30 owners, that created the league?

Poor Los Angeles Dodgers outfielder Matt Kemp is also dragged into the conversation, having appeared in an Instagram photo with V. Stiviano. It was her photo with Magic Johnson that had apparently started the fight.

V: Honey, if it makes you happy, I will remove all of the black people from my Instagram.

DS: You said that before, you said, “I understand.”

V: I DID remove the people that were independently on my Instagram that are black.

V: I didn’t remove Matt Kemp and Magic Johnson, but I thought—

V: I thought Matt Kemp is mixed, and he was OK, just like me.

V: He’s lighter and whiter than me.

V: I met his mother.

DS: You think I’m a racist, and wouldn’t—

And there is also this baffling exchange about black Jews in Israel:

DS: It’s the world! You go to Israel, the blacks are just treated like dogs.

V: So do you have to treat them like that too?

DS: The white Jews, there’s white Jews and black Jews, do you understand?

V: And are the black Jews less than the white Jews?

V: And is that right?

DS: It isn’t a question—we don’t evaluate what’s right and wrong, we live in a society. We live in a culture. We have to live within that culture.

V: But shouldn’t we take a stand for what’s wrong? And be the change and the difference?

DS: I don’t want to change the culture, because I can’t. It’s too big and too [unknown].

V: But you can change yourself.

They close by essentially invoking Hitler and closing down the thread, comparing Sterling’s viewpoints to the Holocaust:

V: It’s like saying, “Let’s just persecute and kill all of the Jews.”

V: Isn’t it wrong? Wasn’t it wrong then? With the Holocaust? And you’re Jewish, you understand discrimination.

DS: There’s no racism here. If you don’t want to be… walking… into a basketball game with a certain… person, is that racism?

Thank you, Deadspin.com. Seeing this down in black and white, along with your commentary…well, I’m not sure if it’s more chilling than disgusting, or vice versa.

SO. Between Saturday and Tuesday, ESPN and all the other sports chatterers erupted into a conflagration of righteous anger that was beautiful to behold. “Round-Mound-of-Rebound” Charles Barkley, now a commentator, said it “pisses me off” to know that Sterling greets him happily in public but still thinks of him as a lesser human being, and doesn’t see anything wrong with that attitude. (You heard the man, right? “There’s no racism here.”)

On Tuesday, brand-spanking new NBA Commissioner Adam Silver (who, it must be said, looks an awful lot like Dobby the House-Elf), announced the NBA’s response. Donald Sterling is banned from the NBA for life, meaninghe can never attend another game ANYwhere. He must pay a 2.5 million-dollar fine (the highest that can be assessed). And Silver himself will pressure the other NBA owners to force Sterling to sell the team.

In other words: whatever else you want to complain about, in terms of our Moneyball sports culture, we have achieved this progress: we ALL AGREE that RACISM IS REPUGNANT. 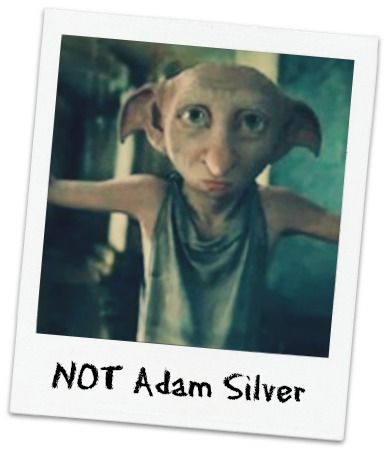 The reaction among the sports chatterers has been one of authentic relief, pride, and yes, joy. I can’t get enough of it. Finally…we’re talking about something REAL here! We’re discussing the importance of human dignity in the workplace! We’re drawing parallels between “minorities” and women! We are sounding full-on progressive.

I know pretty soon it’ll all die down and I’ll go back to being annoyed by cheerleaders, badly-behaved spoiled stars, and coverage of things like the Masters golf tournament that still excludes women and still plays on a course with a proud history of excluding both women and people of color. But for now, I want to celebrate Adam Silver, the NBA, and this moment of joy in the power of standing up for what’s decent.

Care to tune in? What do you make of this moment in sports history? What does it say to you?

7 thoughts on “Sterling and Silver: The NBA Shows its True Mettle, and…I Love It!”