I’m never getting New Zealand out of my system, just so you know. But since the Mate and I are embarking on Road Trip VII next week, this will be my last post about all things Kiwi for now. Promise.

1.TEA. Like the Brits whose Commonwealth they share, New Zealanders are a nation of tea-drinkers first. My tribe! This picture from our first night’s accommodation in Christchurch tells you everything you need to know: one tiny bit of crappy instant coffee, and several varieties of gourmet tea.

Welcome to my world, coffee people. How ya like it?

(That said, Starbucks culture has made huge inroads. Euro-style cafes are everywhere now, more ubiquitous than the old-fashioned “tearooms”, and you can now buy commuter mugs–unheard of, 20 years ago.)

2. Holiday parks. No, they aren’t amusement parks–they’re a super-efficient type of accommodation, offering, in one location, everything from a place to pitch your tent or park your camper to cabins to motel rooms, ranging from the suite-with-bathroom-and-full-kitchen to a space just big enough for a bed, and everything in between. Communal kitchens, bathrooms, laundry, wifi areas and kids’ playgrounds fill in all the in-between needs, and we’ve always found them friendly and orderly. What a great idea! Why don’t these exist in the U.S.?

Sometimes all you need is a bed and a roof!

This adorable cabin in Okarito was exactly what we needed after four days of tramping.

3. Meat pies. How are these not a “thing” in the US? How, I ask you? And don’t give me that health-food-GF-DF-locavore-movement argument–people still eat KFC, don’t they? I don’t GET it.

4. Multisport. I know, my last post was entirely devoted to this topic. But I still don’t get why Americans aren’t more into the idea of cross-country running-riding-paddling-or-swimming races, not as teams or as made-for-TV spectacles like The Amazing Race, but just…fun. 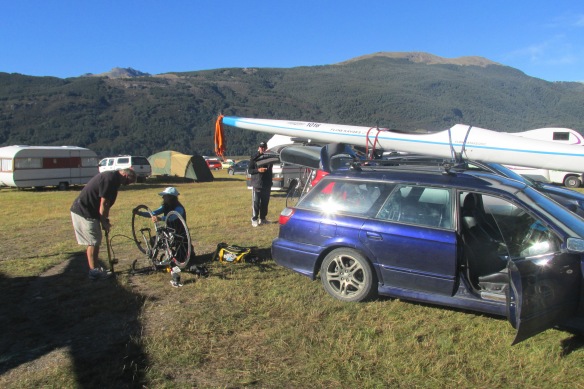 5. Podocarps. OK, these aren’t exactly cultural aspects…they’re botanical. Trees, in fact. New Zealand has no native coniferous trees; they have podocarps. (The name means foot-seed in Greek, I guess from the shape of the seeds.) Evolutionarily, they are much older than conifers–and boy are they cool-looking. There are many varieties–totara, kahikatea, matai, kauri–but my favorite by far is the Rimu. Let me introduce you. 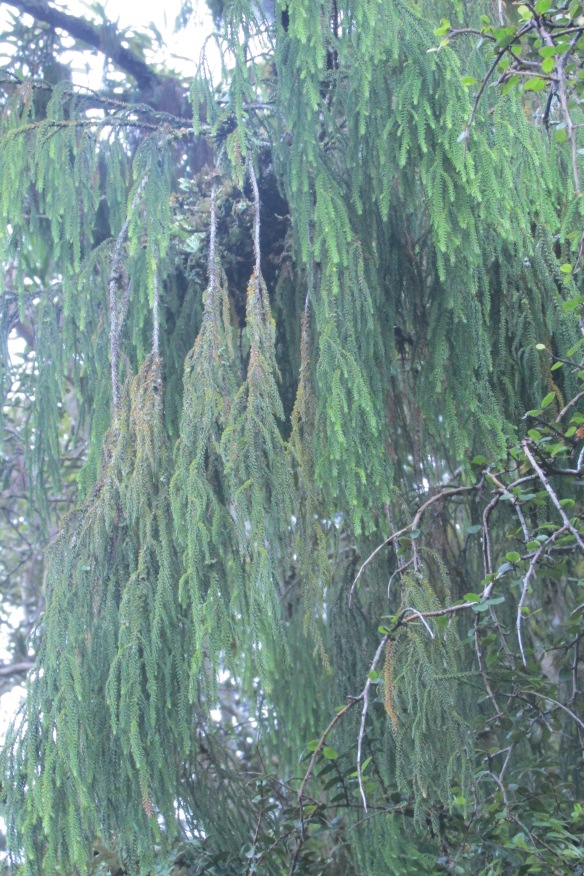 6. That accent. Ex-cent. It just gets me. In fact, I was forced to come up with seven (sivin) Faves because six would be pronounced “sex”, and I really didn’t want to go there. Stike poi for-ivah!

7. Tea again. After the Mate and I went for a paddle around beautiful Okarito Lagoon on the South Island’s west coast, the kayak rental company treated us to complementary tea…complete with china cup. My people!

I hope everyone reading this gets a chance to find an equally “simpatico” spot for themselves outside of their own culture…and hopefully, not quite so far away!

A fun highlight of visiting English-speaking countries is learning just how different a language English can become. We discovered this big-time in New Zealand in 1996.

Just a coupla Kiwi Kids–or as they pronounced it in the South, “Kuds”

First, there were the words that sound exactly the same but mean something completely different. (If you’ve been to the UK, you’ll likely recognize these.) For example:

tea = the drink; but also morning or afternoon tea, the break you take, like in England; but ALSO supper, so when someone invites you “for tea” you really have to nail ’em down

bench = counter (in a kitchen)

Then there are some which kinda-sorta sound like our terms, but still caught me off guard till I got used to them: 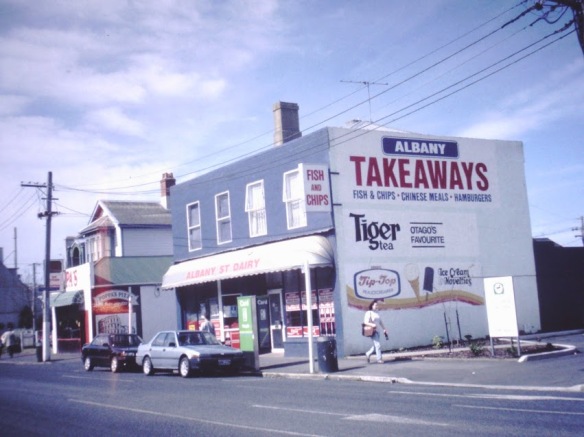 SO ubiquitous, I wanted to write a novel called “Tearooms and Takeaways”

Guess that makes as much sense as “body shop”

And then there was the accent.

Understand, we lived in the southern part of the South Island. That’s like someone from outside the US moving to, say, Alabama. Even the folks we met in Auckland, in the North, said, “Oh, Dunedin…they have queer ways down there” (which to me sounded like, “queeh wize dan theh”).

My favorite accent story involves Son One thinking someone at his school shared his name, when it turned out that the kid’s name only sounded the same due to the accent. But I can’t explain further without violating Son One’s privacy. 🙂

Son Two, at kindergarten (“Kindie”), had so much trouble understanding the other kids (“kuds”), that he gave up, poor kud, and spent playtime by himself.

So, I’ve just alluded to two components of the  Kiwi accent. One is the tendency to abbreviate everything. (Australians–Aussies–do this too.) Therefore,

OK, Kiwi Kwiz time! You fill in the blanks:

The Kiwi Kwiz was something I developed for funsies, in weekly emails back home. (No Facebook or blogging back then.) To play, you need to know about the second component of the accent:  the Great Vowel Shift. You already know that “mate” becomes “mite” down there. But, in the South at least, short “i” turns into a short “u” sound–“kid” becomes “kud”–and the short “e” becomes a short “i”:  “fresh” becomes “frish.”

Thus, the brand new supermarket in town, Big Fresh, was pronounced Bug Frish. We loved this.

Other vowel shifts included “skeery” for “scary,” “stike” for “steak,” and “poi” for “pie.” So. Ready for another Kwiz? These are some phrases we heard:

What are “chicken formalities”? (Hint: it’s something they call you to the counter, I mean the bench–or the binch–to take care of at the airport.)

What is “cheetah chase”? (Hint: it’s good melted on bread.)

What is “Kevin sailing?” (Hint: it’s what you see when you’re in a cave and you look up.)

First one with the most correct Kwiz answers wins a prize! I mean a proize.

Next post (which will be the last one will I get back in February): Reason #2 for the Return to Kiwiland. But here’s a hint: 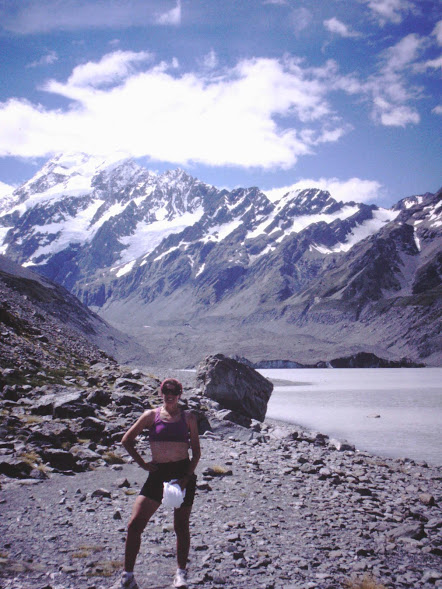 It has to do with running…mountains…and writing.

Who cares if I still have an unworking Stairmaster in my barn?

[Last year’s resolution: By the end of 2015, I will have either fixed my Stairmaster machine or gotten rid of i])

Who cares if I’m still in the middle of Chapter 16 in a 21-chapter book?

[Last year’s resolution: By the end of 2015, I will have finished the first draft of Altitude (Book Three of the Flying Burgowski trilogy) and be actively re-revising the first half]

[Last year’s resolution: By the end of 2015, I will have invited someone I would like to know better for a walk or a cup of tea]

As I wrote last year, “The secret to success is having really low standards.” It’s also, I believe, the maintenance of the feeling of forward progress–the alternative to which is stepping into that swamp of grumpiness and self-pity where the only escape is too much chocolate…you see where this leads, right?

So let me take a minute to celebrate the two resolutions that I DID keep last year:

** ahem ** Honesty compels me to admit that I officially adopted said fitness regimen all of **cough** four days ago…but HEY. I’ve kept it up for four days, in 2015, so that still COUNTS. 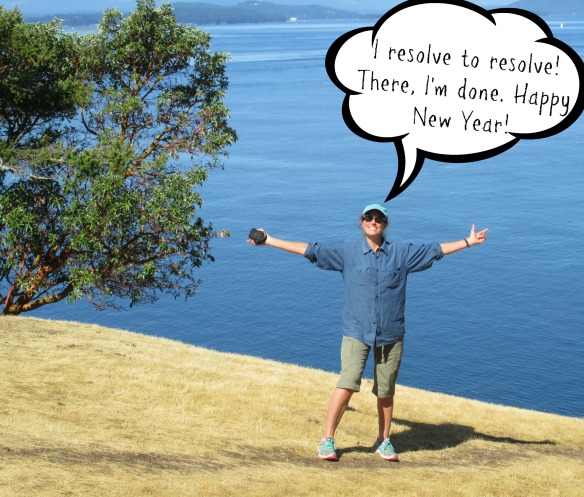 And all of those so-far-unkept resolutions are just that, I’ve decided: not failed, just late bloomers. Who’s in charge here? That’s right. So here are my new low-resolution resolutions:

…oh, and that Stairmaster? Maybe the unknown person I invite for a walk or a cup of tea will help me figure out what to do with it.

Got a resolution to share? Don’t believe in ’em? Tell me about it either way. And…Happy New Year!